A Tamil family who have been separated for over a week while in immigration detention are set to be reunited in Perth this evening.

Nades Murugappan and his six year old daughter Kopika have just landed at Perth Airport. They’ll be reunited with Priya and four year old Thaanica, who is being treated at Perth Children’s Hospital for sepsis.

The Tamil family received the news this morning that they are now free from immigration detention with the federal government allowing them to stay in the community in Perth while the legal process plays-out. The Muruguppin’s had been in detention since 2019 after their protection visa expired.

However, Immigration Minister Alex Hawke said the family are not genuine refugees and has warned they could be transferred to Sri Lanka. Their future now relies on whether Tharnicaa has the right to apply for a protection visa, even though both girls were born in Australia.

Here’s what she had to say:

A group of supporters from various human rights groups were at the airport for the arrival.

“They can’t be deported back to Sri Lanka and back to danger.

“These are people who are fleeing civil war.”

Ms Fox said they are unsure if they will be able to greet Nades and Kopika before they head to PCH.

“Part of the government’s approach has been to hide them away in the hope it will dehumanise them.

“I imagine the government is going to try and sneak them through the back door but we’re hopeful we’ll see them.”

Ms Fox said the Tamil community in Perth will be supporting the family while they’re here.

Press PLAY to hear more about how you can support the family: 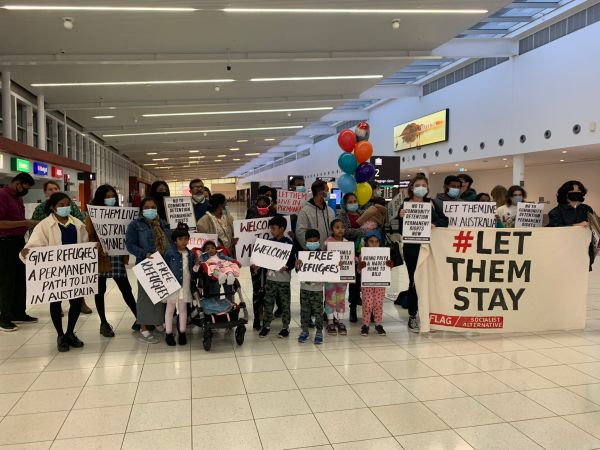