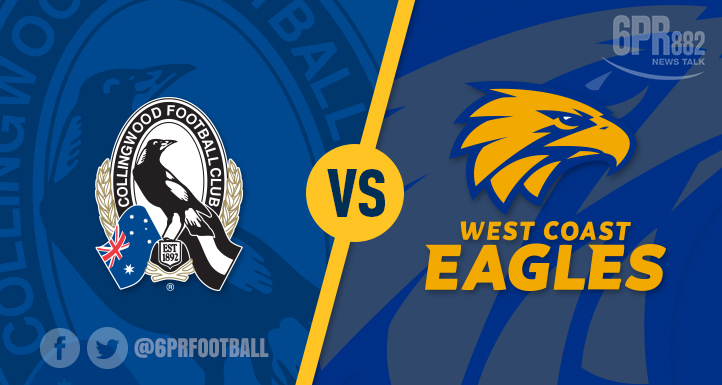 The West Coast Eagles have fought off a high-flying Magpies team to claim a 16-point victory in front of a record crowd at Optus Stadium on Saturday night.

Less than a goal separated the teams as they see-sawed through the game, but with only one-man left on the bench for the Eagles they struggled right to the end for their 12.14 (86) to 10.10 (70) win over Collingwood.

Reliable goalkicker Josh Kennedy makes his long awaited return to the game after a leg injury sidelined the sharp shooter for five games, he didn’t kick his first goal until late in the third quarter. But Kennedy’s second goal lifted his team before fellow forward Jack Darling followed in Kennedy’s footsteps to take a big mark and seal the win for the Eagles.

Brad Sheppard injured his left hamstring early in the game and could miss the rest of the finals. While Chris Masten and Willie Rioli were both brought to the bench with the blood rule late in the game.

We made a Collingwood supporter sing the @WestCoastEagles team song for an official @AFL Finals Sherrin pic.twitter.com/p9VxSlfHE1

“Joshy [Kennedy] was good, he’ll admit he was probably a bit rusty early and dropped a few that he would’ve taken. He helps me out a lot,” Jack Darling told us after the game.

“All came down to the contested possession in the end, and that was the ball game” Jack Crisp spoke with 6PR after Collingwood’s loss.

“We’ve been a group that are looking out for one another, prepared to play for each other I don’t think we saw anything different tonight. Whether we’ve won games or we’ve lost them we’ve played with a consistency of effort for each other,” Collingwood coach Nathan Buckley says after the game.

“Unfortunately Shep might miss a game, he might miss a couple but the squad mentality and the way they handle it. Telling Schofield he wasn’t going to play this week was the hardest thing I think I’ve done as a coach, and the way he’s handled it was first class. We’ve got some really good leaders in that space,” West Coast coach, Adam Simpson, said after the win.

The ruck competition is always an exciting one and Scott Lycett is getting some help from a teammate after a tough game against Melbourne in Round 23.

“We’ve got Nic [Naitanui] down here doing a bit of work with the rucks and he [Lycett] probably did let himself down a little bit against [Max] Gawn, who’s a quality ruckman and as you know Grundy is too and I think Scott will take some confidence out of last time we did play Collingwood and his performance against Grundy,” Jaymie Graham told 6PR.

“It’s across the ground with this team and we know we have to at least even that contest across the ground,” Collingwood Assistant Coach Robert Harvey said about going up against the Eagles.

“I think our midfield has pretty much held their own for the majority of the season, we’ve had some ups and downs as far as personnel so we’ve had to adapt through the season, so whatever they throw at us tonight, we’re capable of matching them,”West Coast Eagles Assistant Coach Sam Mitchell told 6PR on the day of the game.