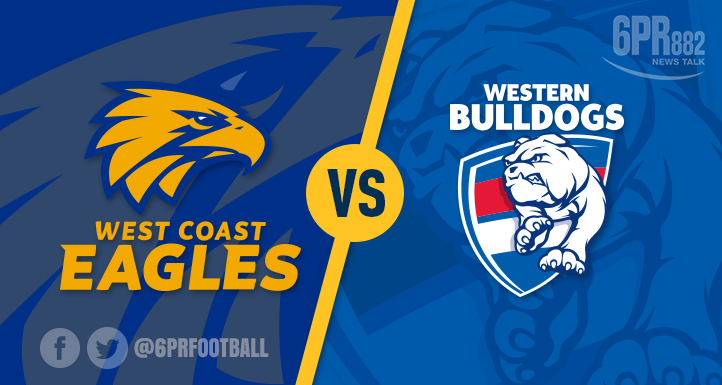 The Western Bulldogs travel to WA to take on the reigning premiers, bouncedown is from 3.20pm (AWST). The Eagles have won their past four matches against the Bulldogs, by an average of 30 points. If they win today, West Coast will move into 4th spot a game clear of Brisbane, while the Bulldogs will move to 5-6 with a win today and join the pack of teams chasing to make it into the top 8.

One change for the Eagles, with Jackson Nelson (omit.) making way for Lewis Jetta, who is returning from a one-match suspension. The Bulldogs have made three changes to the side that lost to North Melbourne last week, with Billy Gowers, Lachie Young and Ryan Gardner (debut) included for Mitch Wallis (injured), Hayden Crozier (injured) and Ed Richards (omit.).

Accuracy has been the story in the first quarter, with scores all tied up at the first break. Eagles have 3 goals, singles to Kennedy, Darling and Cripps, while the Bulldogs have been wasteful with 2.7, goals to Gowers and Dunkley and will be disappointed with a few missed chances. Johannisen and Dunkley have had plenty of the footy, with 12 touches each at quarter time.

Eagles kicked the last four goals of the half, and the Dogs will still be ruing their missed chances as they have kicked an inaccurate 4.10. The Eagles have been strong from the centre clearances, Gaff and Shuey have used it well and gathered plenty of it.

A fast start to the 3rd quarter, as Josh Kennedy kicks his third less than a minute in, and then Darling adding to it with his third also, and the lead extends to 23 points, and the Eagles look like they could blow the game open. Gowers does his best to help his side with a great long range goal, but Darling’s fourth erases that effort, the big forward shaving a day out for West Coast.

Waterman kicks his first goal for the year, and now has three in three minutes as the Eagles are piling on the points – the lead up to 49 points with 2 minutes left in the third term.

The Eagles didn’t stop, kicking 21 goals for the game to blow out the Bulldogs. Final score was 21.7.133 to 10.12.72. Andrew Gaff gathered lots of the ball with 36 touches, and it was a day for the big forwards – Josh Kennedy had 3 while Darling had a bag of 6. Ryan and Waterman also had 3, while Cripps had 2. For Waterman, it was his first three goals for the season.

Peter Sumich was given the task of picking the best players for Tony Barlow Fine Menswear Player of the Year. He gave Jack Darling the 5 votes for his 6-goal bag, 4 to Lewis Jetta for his dash off the halfback line, 3 to Gaff, 2 to Shuey, and 1 to Elliot Yeo.