What Denis Pagan whispered to Simmo on stage

Denis Pagan coached Adam Simpson to a Premiership with North Melbourne and on Saturday they were on the stage together again with Pagan handing over the Jock McHale medal to his former player and newest Premership coach.

“You don’t often get to opportunity to present the medal to the winning coach and to present it to one of your players you coached throughout the 90s when things really went well for the Kangas were just great. Adam was a two-time Premiership player and as well as now a Premiership coach,” Pagan told Steve and Bazn on 6PR Breakfast.
“It’s very special and quite emotional. I went to shake hands with Adam and he pushed my hand away and gave me a big hug and I whispered in his ear, ‘is that appropriate in front of 100,000 people’,” he said. 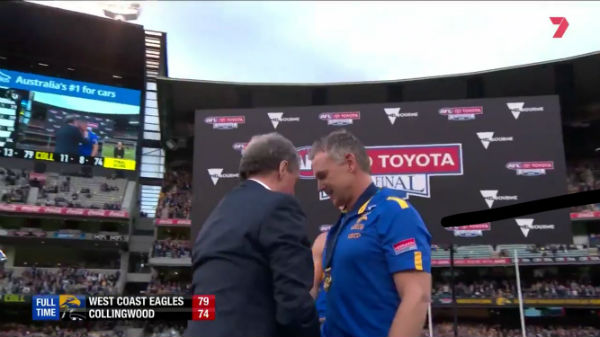