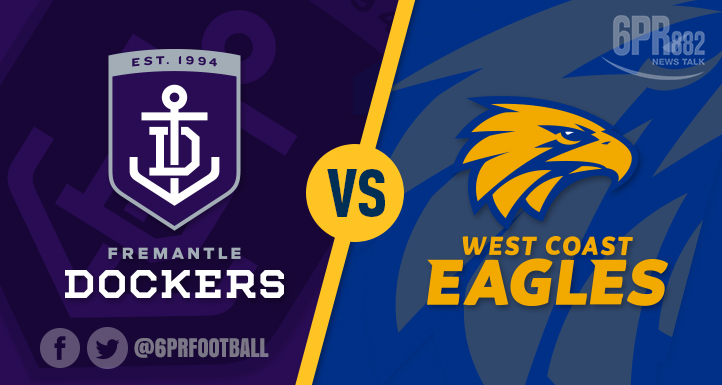 The Eagles have claimed bragging rights after defeating Fremantle by eight-points in the first Western Derby at Optus Stadium in a close game.

It was a tight affair between the cross-town rivals in the 47th Derby with the scores even leveling in the second quarter, but with the Dockers one man down the Eagles kept their energy for the 12.9 (81) to 13.11 (89) win.

Micheal Walters was an early casualty suffering a knee injury in the first quarter and unable to return to the ground.
Jack Darling had an impressive second quarter kicking three goals in the term. Josh Kennedy added three goals in the game and broke Peter Sumich’s 514 goal kicking record for West Coast.

But after a controversial week discussing the future of the Ross Glendinning Medal, it was only fitting there were dual winners… Shannon Hurn and Lachie Neale.

Hear how the game played out…

One of the Ross Glendinning Medalists, Shannon Hurn, spoke with us after the Eagles win…

Ed Langdon managed 26 disposals and a goal but said his team’s first half let them down.

“Our opportunities weren’t as frequent as they were in the first half:” West Coast coach Adam Simpson dissected their win.

“I thought we never gave up and they just capitalised off some dropped marks,” coach Ross Lyon said after Fremantle’s loss.

West Coast Eagles Assistant Coach Adrian Hickmott previewed the Western Derby with us and told us Elliot Yeo and Luke Shuey are good to go.

“We’re certainly going to have to force them to defend and really move the ball,” Fremantle Dockers Assistant Coach Anthony Rock told 6PR before Derby 47.

Did you know our very own Luke McPharlin had the nickname of “Whoosh” and he plays in a social basketball team with some other past Freo players? It’s some of the dirt Anthony Morabito dished out on 6PR before Derby 47.

Coling Young is a Player Manager who has 16 players named in the 47th Western Derby.
He gave us his inside knowledge of some of the big name players including Elliot Yeo and Jeremy McGovern.

Fremantle CEO Steve Rosich joined us at our broadcast LIVE outside Optus Stadium ahead of the first Derby at the ground.
“I think the outcome’s the right one, it’s a fair and equitable outcome that sees the medal being awarded today and then in the future it’ll have the joint name of a Fremantle great on their with Ross Glenndinning,” he said about the best on ground medal. But he didn’t confirm who that player would be.