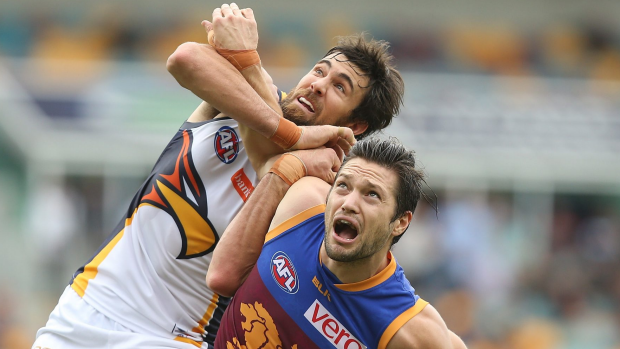 The West Coast Eagles have recorded another road win with a convincing 49-point victory over the Brisbane Lions at the Gabba on Saturday.

Josh Kennedy kicked five goals as his Eagles dominated the game from the second quarter, while the Lions defence struggled to stop West Coasts forwards and their team struggled to hold possession around the ground, although a few brief positives for the home side kept a respectable finish, 12.10 (82) to 20.11 (131).

Matt Priddis injured his nose early in the game, but played on, although far from his best with 16 disposals. Jack Darling finished the game on a high finishing with four goals and Andrew Gaff was impressive with 28 disposals.

It was a slow start but Mark LeCras kicked the first goal of the game. Brisbane kept in the game and only one-point separated the teams at the first break.

‘They look like they’ve come to play, but it’s whether or not they can sustain it’ – Brad says of the Lions #AFLLionsEagles

The Eagles kicked three quick goals at the start of the second quarter the Lions lost control of the ball and only managed one goal in the quarter. Josh Kennedy kicked his third major for the game to overtake Lance Franklin in the race for the Coleman Medal and lead his Eagles to a 36-point margin at the big break.

Brisbane kept the Eagles to three goals in the third, but silly mistakes stopped them from making more of an impact on the scoreboard.

The Lions had a late surge kicking the last three goals of the game, but the damage had been done with the Eagles’ comfortable lead.

‘Dumb as dog poo, I don’t know if anybody’s ever done a test on that, but that’s exactly the way the Lions defence are now playing’ –
Brad

‘The contest work inside is what allowed us to get those goals in the second quarter.’
Eagles debutant, Jonathan Giles, spoke with us after the game…

‘We’re all a little bit nervous about where we are at and what we’re working towards.’
Listen to Adam Simpson’s post game press conference here…