Some visitors to WA from Queensland are being told to get a COVID test and self isolate for 14 days after a new locally transmitted case was detected in Brisbane’s northern suburbs.

A 26-year-old man has been unknowingly infectious since Friday and visited a variety of locations. Genomic testing has revealed this case is linked to a previous cluster from March 12 when a doctor contracted the UK strain of the virus from a patient.

Queensland Chief Health Officer Dr Jeannette Young said it’s believed there is one “unidentified intermediary” who had passed the virus onto the man.

All travellers from Queensland who arrived since March 20 and who have visited the following locations during the relevant times should be tested immediately for COVID-19 and self-quarantine for 14 days from the time they were at the high-risk location. These people will also be required to undertake a day 11 test. 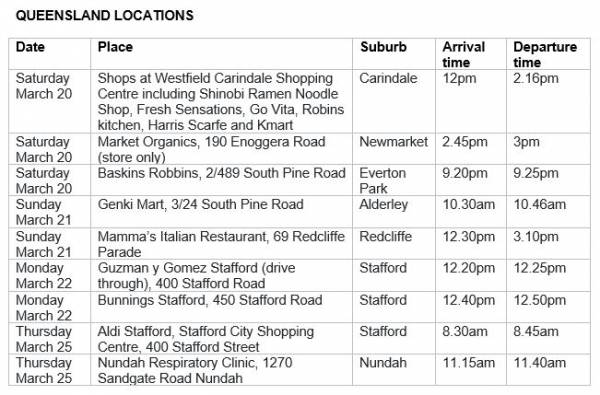 For a current list of high-risk locations, visit QLD Health

Unlike with previous cases of community spread, the WA Government has decided not to slam the border shut to Queensland. Speaking with Oliver Peterson, Health Minister Roger Cook denied this was using the “national hot-spot framework.”

“This is an interim situation until we get better information about what’s going on in Queensland,” said Mr Cook.

“If we get a clear line of sight in terms of where this person contracted the disease, that will give us greater confidence to not put the border back up.”

The State Government will provide a further update on the situation on the weekend.