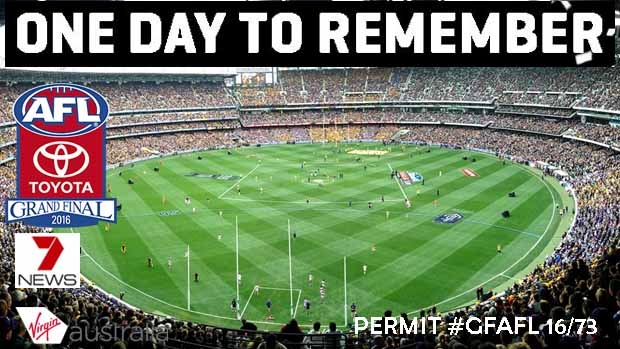 Would you like to take 5 of your best friends to the MCG for the 2016 Toyota AFL Grand Final?

6PR and Channel 7 are flying SIX people on Virgin Australia to Melbourne.  Win, and you’ll all stay two nights in luxury, attend an AFL function on grand final eve, and be at the MCG on October 1 for the big game.

For your chance to win, you must be one of seven finalists on our stand by list… simply watch Seven News at 6 for the code word, and get ready to call Breakfast the next week day morning.

The following addendum document stipulates the 6PR competition rules for all participants and applies specifically to 6PR’s ‘Win a trip for you and 5 friends to the 2016 Toyota AFL Grand Final.’

The competition is sponsored by Channel Seven Perth and 6PR.

There is ONE major prize.

The prize consists of a trip for six people from Perth to Melbourne for the 2016 Toyota AFL Grand Final, including return economy airfares with Virgin Australia departing Perth at 11.30am on Friday 30 September, returning from Melbourne at 20.45pm on Sunday 2 October 2015.  Two nights’ accommodation for six people staying at the Novotel Melbourne on Collins (270 Collins Street Melbourne VIC), six tickets to the official West Coast Eagles Grand Final Eve Dinner, and six tickets to the 2016 Toyota AFL Grand Final at the MCG on Saturday October 1, 2016.

To enter, contestants must watch for the code word, shown during Seven News at 6pm Sunday to Thursday from September 11 to September 15, 2016.  Then they must listen to 6PR’s Breakfast Program between 5.30am ? 8.30am the following weekday morning (Monday, September 12 to Friday, September 16) and be the correct eligible caller on Ph: 922 11 882 with the code word to become one of seven finalists in the draw to win a trip for six to the 2016 Toyota AFL Grand Final.

The winner will be drawn at random from the seven finalists during the Breakfast program on Monday, September 19, 2016.

Only one entrant per household/family permitted over the course of the competition.

–  The ‘Promoter’ means the company that is promoting this competition, which will be Radio 6PR Perth Pty Ltd, trading as Radio 6PR, (‘Radio 6PR’) a member of Macquarie Media Limited

h)    A person who is not usually a resident of Western Australia.
i)     A person who refuses to comply with or breaches any terms of these General Competition Entry Rules.