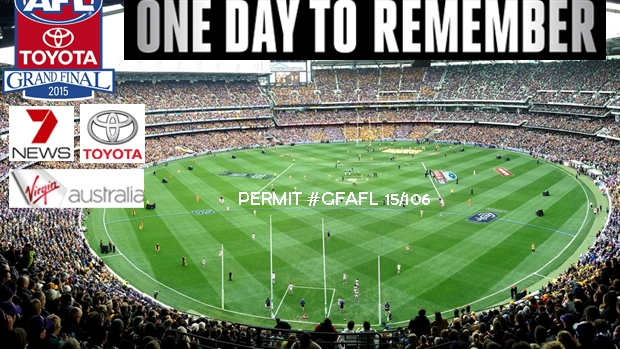 We’re giving you the chance to experience ONE DAY TO REMEMBER, and win one of 10 double trips to the 2015 Toyota AFL Grand Final (Permit #GFAFL 15/106)

Watch Seven News Sunday to Thursday at 6pm, grab the Toyota Code Word, then listen to Steve Mills & Basil Zempilas the next weekday morning from 5.30am, because we’re giving you the chance to win it, live it and love it!

Thanks to Toyota, our 10 double trips include return economy airfaires flying Virgin Australia (Perth to Melbourne), two nights accommodation at the Novotel on Collins, two tickets to a Grand Final Eve Dinner, and two reserved seats at the MCG for the 2015 Toyota AFL Grand Final.

The following addendum document stipulates the 6PR competition rules for all participants and applies specifically to 6PR’s ‘Win one of TEN trips for two to the 2015 Toyota AFL Grand Final Competition.

The competition is sponsored by Toyota WA and Channel Seven Perth.

There is a total of TEN major prizes.

To enter, contestants must watch for the code word, shown during Seven News at 6pm Sunday to Thursday from July 12 to July 23, 2015.  Then they must listen to 6PR’s Breakfast Program between 5.30am ? 8.30am the following weekday morning (Monday July 13 to Friday July 24) and be the correct eligible caller on Ph: 922 11 882 with the code word to win a trip for two to the 2015 Toyota AFL Grand Final.

Only one winner per household/family permitted over the course of the competition.

–  The ‘Promoter’ means the company that is promoting this competition, which will be Radio 6PR Perth Pty Ltd, trading as Radio 6PR, (‘Radio 6PR’) a member of the Fairfax Radio Network