Win a trip for two to the Australian Open Tennis 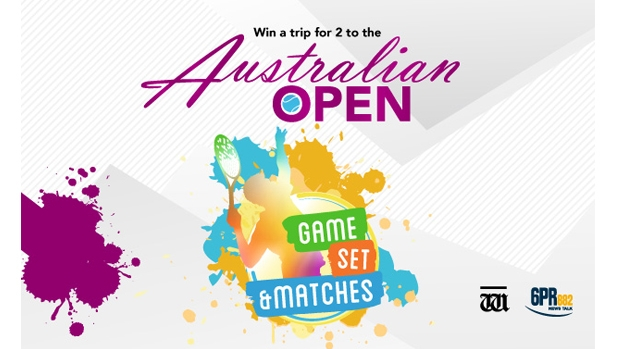 You and a friend could WIN a trip for two to the Australian Open to see the Men’s Semi-final and Men’s Final.

For your chance to win, get the daily code word in The West Australian, Monday to Friday (16th – 20th January, 2017), then listen to Steve & Baz for Breakfast and across the day to become one of our seven daily finalists (when you hear the cue-to-call, just be the seventh eligible caller on 922 11 882).

The competition runs between Monday 16th January to Friday 20th January, 2017. With a major draw on Monday 23rd January 2017

To be in the running to win, entrants must get the daily code word published in The West Australian newspaper Monday 16th January to Friday 20th January, 2017, then listen to 6PR in Breakfast and throughout the day for the cue to call.

When the cue-to-call is played, the correct nominated eligible caller through at that time will be deemed a finalist, and put in the draw to win the major prize.

Each day there will be a total of seven finalists. Five from 6PR. (Two in Breakfast and three between 8:30am and 6pm), plus two selected by way of a second chance draw by logging on to thewest.com.au

To be eligible for the daily draw from thewest,com.au registrations you must register the correct daily code word at thewest.com.au/competitions on the day it is published by 3pm WST.

?         Only one entry per day per person is valid.  Multiple daily entries will be omitted

?         By entering the Game, Set and Matches daily code word at thewest.com.au/competitions you agree to the terms of the Seven West Media Privacy Policy that can be viewed at: http://info.thewest.com.au/documents/WAN_PrivacyPolicy.pdf.

There is ONE major prize consisting of:

The major prize will be drawn on Monday 23rd January, 2017 in the 6PR Breakfast program

The prize is not transferrable.

–  The ‘Promoter’ means the company that is promoting this competition, which will be Radio 6PR Perth Pty Ltd, trading as Radio 6PR, (‘Radio 6PR’).