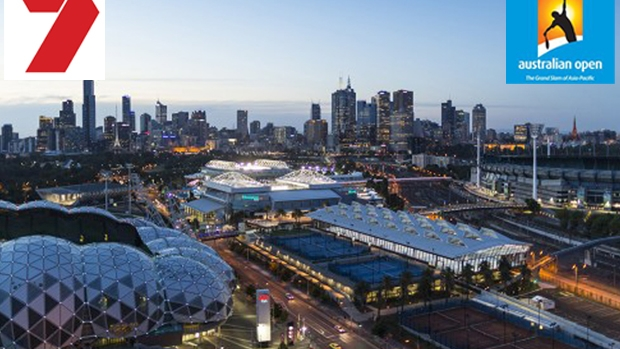 Thanks to Channel Seven, we’re sending two couples to Melbourne to watch both the Womens and Mens Finals.

Simply watch the Australian Open coverage live and free on Seven, Seven Two and Seven Mate from Monday January 19, and listen to Steve & Basil weekday mornings for your chance to be one of 7 finalists in the weekly draw!

Game, Set and Match – thanks to Channel Seven, and Breakfast with Steve & Basil weekdays on 882 6PR.

To be in the running to win, entrants must watch the television coverage of the Australian Open Tennis Tournament on Channel Seven, Seven Two or Seven Mate between Monday 19th January to Thursday 29th January 2015, then listen to 6PR’s Breakfast program with Steve Mills and Basil Zempilas the following weekday morning.  To be one of seven finalists in the weekly draw, entrants must be eligible (under 6PR’s General Competition Entry Rules), and be the nominated caller to correctly answer a question pertaining to the live television broadcast aired on Channel Seven Perth (Seven Two and Seven Mate included).

There are two major prizes, each consisting of a trip for two people to Melbourne, including return economy airfares, 2 nights accommodation including breakfast, $1000 spending money, plus 2 tickets to the Womens Final and 2 tickets to the Mens Final of the Australian Open Tennis Tournament.

The exact prize details are as follows:

Prizes are not transferrable.

–  The "Promoter" means the company that is promoting this competition, which will be Radio 6PR Perth Pty Ltd, trading as Radio 6PR, ("Radio 6PR") a member of the Fairfax Radio Network

a)    a person who is an employee, officer, servant or contractor of the Promoter or its related body corporate or associates or any of its agencies involved with this competition.
b)    The spouse, de facto spouse, parent, natural or adopted child, and sibling (whether natural or adopted by a parent), of such employees and contractors (whether or not they live in the same household).

–  In the event of a "Standby list" or "Register to win" type of competition unless otherwise stated no person is eligible to be placed in the Final draw more than once for each prize during the competition period.

–  On occasion, prizes are provided to the Promoter by a third party under a commercial arrangement ("Third Party").

–  Winners will be notified by mail or telephone, and if no mail address or telephone number is given, by any other contact details provided by the winner.