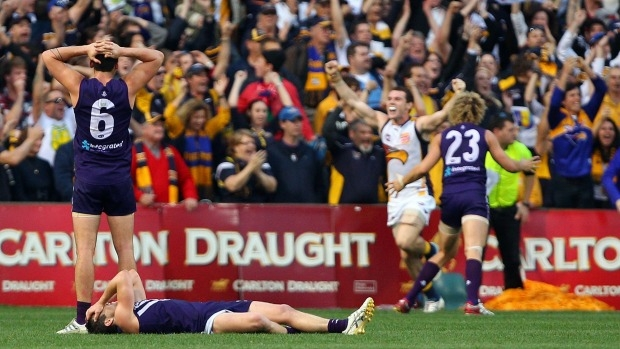 Missed Ross Lyon, Adam Simpson, Cam Sutcliffe or Xavier Ellis on Sports Today ahead of Western Derby 42? This is your one-stop shop to catch all of the audio along with WA Today’s preview.

There are 16 other teams in the competition but only one game that will stop WA for a few hours on Sunday afternoon.

In the lead-up to the biggest Western Derby of them all, our crack (pot) panel got together to specifically run the rule over the eagerly anticipated Dockers-Eagles showdown.

Nick-o:
1. Both Fremantle and West Coast have exceeded expectations. Most had the Dockers missing the top four while the Eagles weren’t expected to make the eight.
2. Josh Kennedy will become West Coast’s first Coleman medallist in 16 years. With four games left he has a career-best 62 goals for the season, averaging 3.4 goals a game. All while the team that let him go sits second last on the ladder.
3. Fremantle have found a player in Alex Pearce. Seems to be able to play both ends of the ground and showed he was worthy of a Rising Star nomination with 13 touches, nine marks and a goal against St Kilda.

Fossie:
1. The Dockers are a better side with ruckman Jon Griffin in their line up. Griffin and fellow giant Aaron Sandilands will rotate through the forward line and stretch the Eagles’ ever-shrinking backline.
2. The Eagles will win if Nic Naitanui plays. That simple.
3. Very few players have played two weeks after tearing a hamstring. Playing Jeremy McGovern on a wet,cold, miserable night, and throwing him into the ruck was dumb and costly. West Coast should have saved him for Freo. He would have jumped all over the Dockers’ tall timber.

The People’s Elbo:
1. Adam Simpson-coached West coast sides have kicked 30.36 in three losses to Fremantle, which has kicked 41.26. So the Dockers have won by a combined total of 55 points although they have had just one extra scoring shot.
2. Tom Lamb is ready to return for West Coast and have an impact for the Eagles in attack. He’s overcome his knee injury and has kicked 10 goals in three games for East Perth in the WAFL.
3. The Eagles have lost the past six games to the Dockers, but they are trying something new this time around – losing before the derby (to Hawthorn by 14 points). Ignoring round one of 2013 (because it was round one and there was no game the week before), West Coast has won the week before each of the other past five losses to Fremantle.

Presto:
1. The preparations for both teams contrast starkly; West Coast lost a hard-running, bruising encounter in the wet against reigning premier Hawthorn, while Fremantle was in fine form crushing the Saints in the comfy confines of Etihad Stadium (but did then have to travel back to Perth).
2. West Coast has been the better team since Fremantle’s 30-point round three derby win and on that form deserves to start favourite. But the Eagles are currently $2.15 with TAB. The Dockers are clear $1.70 favourites.
3. Scoreboard pressure will prove pivotal. Nic Nat or not, both teams have strong midfields, which will give their forwards enough chances to score – the game will be won by the team that converts best.