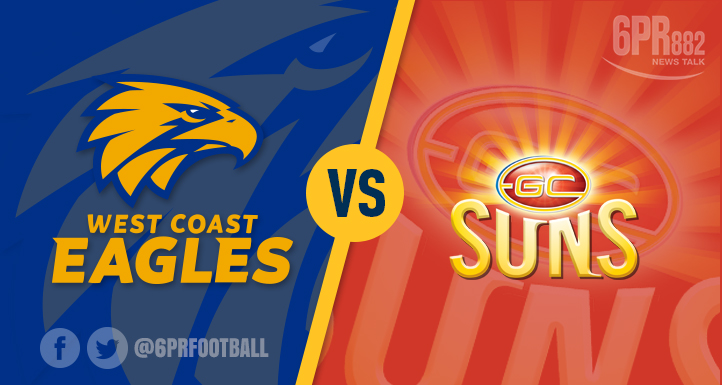 Bouncedown for Eagles and Gold Coast starts at 6.10pm (AWST). Karl Langdon, Mark Readings and Glen Jakovich are calling the game tonight from Optus Stadium for the 6PR broadcast.

Heavy rainfall throughout Perth this morning, but the Bureau of Meteorology is predicting no more rain for the match tonight, clear skies currently outside the stadium.

Speaking to West Coast Eagles assistant Daniel Pratt before the match, he has confirmed that Tom Hickey (injured) and Jarrod Brander (omitted) are out, Nathan Vardy and Jack Redden are in for tonight’s match.

Outs for the Suns are Pearce Hanley (injured), Will Brodie (omitted), and Jack Lukosius (omitted). The Suns have brought in Aaron Young, Anthony Miles, and Wil Powell.

Wil Powell, who was an inclusion this week, has struck first and scored a goal inside 3 minutes at Optus Stadium. Josh Kennedy for the Eagles takes a great mark and replies, but half way through the first quarter these are the only two majors. Eagles lead 1.3.9 to 1.1.7

After a slow start to the quarter, Eagles hit the scoreboard and lead the Suns 3.6.24 to 1.3.9 at quarter time. Josh Kennedy has two goals and is looking like the Josh Kennedy Eagles fans have been asking for, taking some strong marks early tonight.

A fairly one-sided game at Optus Stadium, a six-goal lead at half time to the Eagles. Fans will be happy to see the forwards starting to fire, Jack Darling kicked three in a row during the second term, Kennedy has two, while Cripps and Ryan both have one. For the Suns, they have only managed one goal a quarter, Powell and Wright are the only two goal scorers for them here.

Gold Coast win the third term 3 goals to 1, the Eagles failed to bury the Suns who were much tidier with during that quarter. At the last change, it is a 28-point advantage to the Eagles. Jack Martin has been impressive playing in his home state, leading possessions AND tackles for the Suns with 24 and 9.

A beautiful mark from Wil Powell sees him kick his second, and adds to the nerves of Eagles fans as the margin is now only 21 points.

Alex Sexton kicks his first of the night from a set short, and now Gold Coast have the last five goals and have brought the margin to within 11 points. There is still five minutes of play, and Gold Coast are eyeing off an unbelievable comeback, who trailed by 40 half way through the third quarter.

Eagles fight to hold on, after 11.14.80 to 8.9.57. Gold Coast mounted a spirited fight back in the second half, and showed a lot of passion. Eagles will be happy with their tall forward contribution, Darling kicked four and marked well today and Kennedy had two.

Redden had a game-high 13 tackles, while Yeo had 12 tackles to go with 28 possessions. Jack Martin was impressive with 29 touches and 10 tackles, while Jarrod Harbrow had 30 and used it well.

The win leaves Eagles in 9th, missing the Top 8 by percentage, and they will face St Kilda next weekend at Marvel Stadium. The Suns are now 3-4, and host the Demons who will be feeling confident after their win today.