West Coast travel to take on the Swans 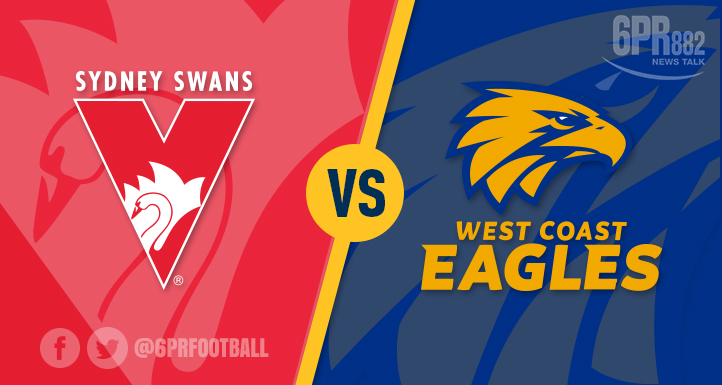 The West Coast Eagles will arrive at the SCG wanting to take care of business, looking to break the hoodoo that has surrounded them at this ground – they haven’t won here at this ground since 1999. They will have to do so without their captain Shannon Hurn, who has been ruled out with a hamstring injury suffered in last week’s match. Tom Hickey has also been ruled out, while Elliot Yeo (calf) didn’t travel with the team to Sydney despite being named during the week.

There are clear skies forecast for the match today, which will be broadcast live from 1pm AWST with our call team Shane McInnes, Karl Langdon and Brad Hardie.

The start that the Swans would have wanted, with Buddy Franklin taking a mark inside 50 and kicking the first goal less than a minute in to the first quarter. Goals to Tom McCartin and James Rose make it a very hot start for Sydney, the Eagles struggling to even get their hands on the ball let alone think about attacking.

With three goals in five minutes for the Eagles – including two in two minutes for Josh Kennedy – the visitors momentarily hit the front, before Tom Papley kicks one late and gives the Swans a 5-point lead at the first break.

Willie Rioli looks like he’ll be in trouble with the match review panel and could miss weeks, after a sling tackle on Colin O’Riordan that caused him to leave the ground and undergo concussion protocol. Goals in the second term to Sam Reid, Rioli, Kennedy and Franklin have kept things even half way through this second term. Reid’s second in the term takes the lead out to 13 points, and his third takes the Swans to a 21-point lead at the main break. Franklin and Kennedy also have three.

A five goal to one third term sees the Swans stamp their authority on this match – despite it being 15th playing 4th, Sydney have looked like the more physical team and have been much cleaner out of the middle. Papley has also hit the score sheet well with three goals at three quarter time., and Franklin has four. The Eagles are struggling to score, with our commentator Shane McInnes acknowledging “the Eagles have left at half time”, a 48-point lead to Sydney at the SCG.

Jake Lloyd has had the ball on a string, with 42 touches and 9 marks. Papley was a maestro in the forward line with 15 score involvements for the match including 5 goals. He has been the best on ground today and set up a lot of the attacking play. Franklin also had 5 for the match, with a goal right on the siren to cap off a 54-point win to the Swans. Eagles now head into the bye 8-4, while the Swans have won three of the last five and head into their break 4-8.

Brad Hardie, Shane McInnes and Karl Langdon couldn’t find a player to give the 5 votes to for Tony Barlow Menswear, but they managed to award the four votes to Brad Sheppard, three to Jeremy McGovern, two to Josh Kennedy and one vote to Liam Ryan