West Coast rained out by Tigers 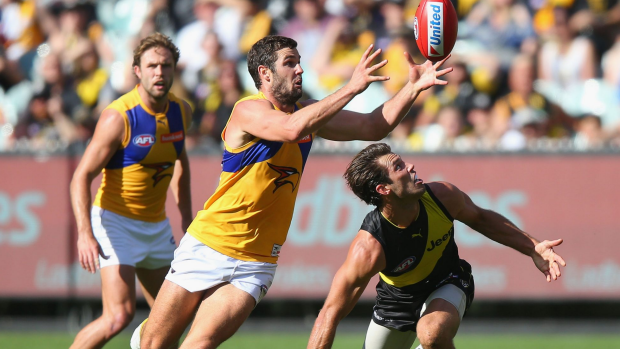 The Richmond Tigers stormed home in the rain for an 11-point win over the West Coast Eagles at the MCG after a tight fight for a majority of the game with 17-points the biggest margin of the match.

Daniel Rioli and Dan Butler produced some big highlights for the Tigers with Rioli’s kick from a tough angle and a long stride run from Butler both resulted in goals for Richmond.
While Dustin Martin and Jack Riewoldt saved their best until later in the game, Martin kicked his first well into the second quarter and then went on to play for 40 disposals and Riewoldt broke the goalless drought in the fourth term to cement the Tigers 11.10 (76) to 8.17 (65) win.

Mark LeCras was the first goal kicker of the afternoon, but the Tigers weren’t far behind with Kane Lambert also following through for a major. It was Dan Butler who got the MCG crowd excited with his long run to goal to put the Tigers in front for the first time of the game, but the Eagles edged forward by four points at the first break.

Martin stepped up in the second term and the teams went goal for goal and the Eagles lead by seven points at the main break.

The rains stormed in at the fourth term to create difficult, slippery conditions and it looked like it was going to be a goalless quarter until the 22-minute mark when Riewoldt went in for his first goal of the game and run away with the win.

Daniel Rioli kicks an impressive goal and worked for it before
‘You won’t see a better goal this year’ Brad#AFLTigersEagles
?43 ?43

LeCras finished with three goals while Andrew Gaff had 33 disposals in the hard fought match.

Lewis Jetta was brought back into the Eagles side with Dom Sheed omitted, while Richmond’s Martin was still in the team after in injury scare last week.

‘You’ve got to give credit to Richmond, I think they elevated and we didn’t respond’ Adam Simpson said after the game.
Listen to the full press conference here…


Richmond’s Reece Conca spoke with 6PR after their win…

‘It was definitely a bit of a scramble for about 10-15 minutes there and they were able to hold tough really well; I think that it’s something we’ve got to work on, make the most of our opportunities.’
?Sharrod Wellingham spoke with 6PR after the game…


The West Coast Eagles forward line coach, Jaymie Graham, told 6PR on Saturday morning that ‘with the ‘G, obviously such a wide ground… for our forward lines, defensively it’s a harder challenge because you’ve got a lot more width and a lot more space that you’ve got to defend.’