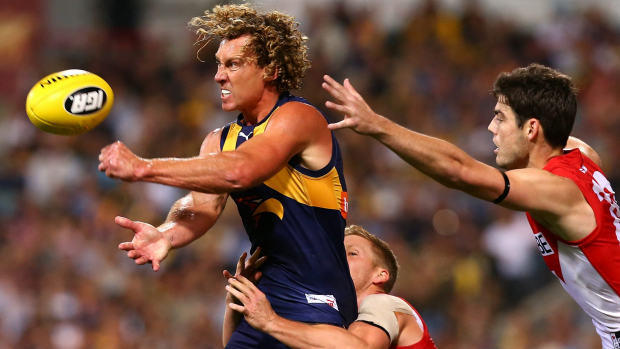 West Coast have bounced back from their loss last week by defeating the winless Sydney Swans by 26-points at Domain Stadium on Thursday night.

A young Swans side travelled to Perth to take on the Eagles and it was a brave and tight contest for most of the game with the scores levelled at quarter time, but the Eagles edged further in front at every other break and the final 13.13 (91) to 10.5 (65) scoreline.

‘This is a young, evolving team’ @Karl6pr describes the @sydneyswans side tonight.
We found this pic of them earlier today #AFLEaglesSwans pic.twitter.com/8muUpoqPy5

Jeremy McGovern was pushed forward and it paid off with a couple of goals next to his name, Jamie Cripps had a big second half kicking three goals.

In the second quarter, all eyes were on Sam Mitchell as the new, mature Eagles copped a kick to the lower leg and was forced into the rooms for treatment, but the 34-year-old ball magnet returned to the ground for the second half and finished with 17 disposals.

INJURY REPORT Not looking good for Sam Mitchell, a possible injury to his lower leg, he’s coming off the ground
#AFLEaglesSwans

‘It has been a very congested game, a lot of player density around the ball’ McPharlin #AFLEaglesSwans

Luke Shuey and Elliot Yeo were everywhere and impressed with 30 and 29 disposals respectively.

Former Eagle, Callum Sinclair was in the ruck for the Swans up against Eagles youngster Jonathan Giles who clocked up 36 hit outs.

West Coast made a couple of changes to their losing side with Lewis Jetta and Mark Hutchings out of the side with Liam Duggan and Sam Butler the couple on ins.
A late change to the Eagles side meant Jack Darling didn’t clear his fitness test with an ankle injury keeping him out of the team and Will Schofield the late inclusion.

The winless Swans also made a couple of changes with Jordan Dawson omitted and Sam Naismith out with a knee injury.

‘Some costly turnovers late, we didn’t use the ball that well coming out of defence,’ Heath Grundy told 6PR after the game…

Listen to what West Coast Assistant Coach, Daniel Pratt had to say before the game…

Listen to what Sydney Assistant Coach, Josh Francou had to say before the game…