A four-week trial of weekend pick-up and drop-off zones along James Street in Northbridge will commence from this Friday in a bid to ease congestion.

Eight existing car bays along both sides of the street will be sign posted and used as temporary bays between the hours of 5pm and 2am on Friday and Saturday nights. 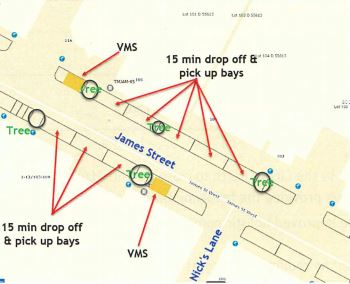 “We all understand the benefits of the ride shares, we have used them and have enjoyed them particularly on a night out,” he told Perth LIVE’s Oliver Peterson.

The bays will have a 15-minute maximum parking time.

The council has worked with local businesses to try and find a way to fix the congestion on the street.

Mustang Bar Owner Mike Keiller says he has doubts about the trial.

“I think from a practical point of view, if you’re heading into Northbridge in a rideshare and you went past the roundabout at James Street and it was gridlocked, everyone is just going to say ‘let us out here’ and they’ll pile out rather than sitting in the car,” he told Oliver Peterson.

Press PLAY to hear the interviews