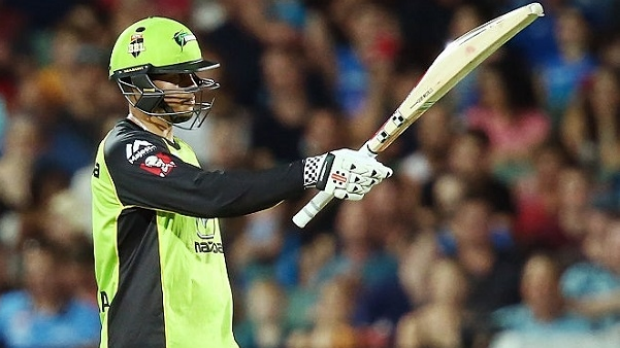 A masterclass performance by Usman Khawaja has continued the Sydney Thunder’s fairytale BBL05 campaign as they advanced to Sunday’s Grand Final after eliminating the Adelaide Strikers from the title race.

Khawaja scored an unbeaten 104 – his second ton of BBL05 – to virtually single handedly guide his side into their first ever Grand Final.

Set 160 to win, Khawaja silenced the crowd of 48,699 by blasting to a half-century in just 24 balls and reached his century with a six off Ben Laughlin.

He joins Craig Simmons as the only player to score two centuries in a Big Bash League season. Simmons scored his in BBL03, one also coming in a semi-final.

Khawaja has the astonishing average of 275 this campaign and his three innings include two centuries and a half-century.

The result means for the second straight season the Strikers have bowed out in the semi finals after finishing the regular season on top of the ladder.

It’s the fourth year in a row the top team has lost in the semi finals to the team finishing fourth.

Khawaja hit 13 boundaries and three sixes as the Thunder cruised to an eight-wicket win with 14 balls to spare.

He was well supported by New Zealand’s Henry Nicholls, who finished 35 not out and shared in an unbroken third wicket stand of 73 with Khawaja.

Thanks to Khawaja, the Thunder raced to 53 in just four overs which virtually was the differemce.

The Strikers were on the back foot early in their innings after winning the toss and deciding to bat with Sri Lankan Mahela Jayawardene (7) and Tim Ludeman (2 off 7 balls) – brilliant caught by Andre Russell running backwards – dismissed early.

Travis Head blasted four boundaries in his 23 before he picked out Ben Rohrer at cover and captain Brad Hodge (14 off 19 balls) both departed inside the first 10 overs.

A good partnership of 42 for the fifth wicket between Alex Ross (47 from 38 balls) and Jake Lehman (14) steadied their innings in the middle overs.

Then two quick-fire knocks by Michael Nesser (27 from 15 balls) and Adil Rashid, who hit 14 from the last three balls of the innings, helped lift the Strikers to 7-159 from their 20 overs.