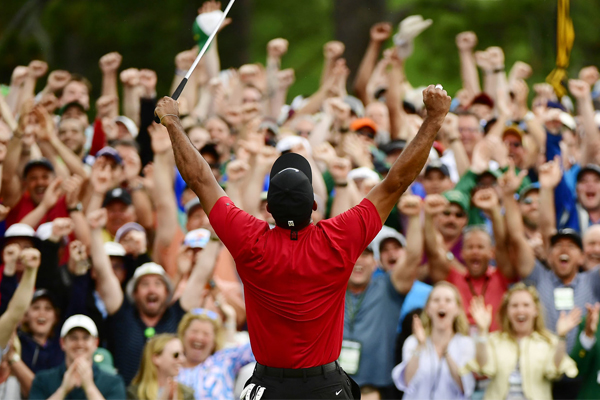 Tiger Woods has cemented one of the greatest comeback stories in sporting history, winning the Masters by one shot.

The victory at August National is the 43-year-old’s 15th major title, his first since 2008.

In between, Tiger’s life unravelled through a mixture of personal problems and crippling injuries.

At one point doctors feared he may not be able to walk again, let alone play golf.

Last year, Tiger shocked the world by winning his first PGA Tournament since 2013.

But in the early hours of this morning, Tiger roared louder than ever as he earned a fifth green jacket.

Tiger shot a two-under-par final round to reign in overnight leader Francesco Molinari and hold off a fast-finishing Dustin Johnson (T2) and Xander Schauffele (T2).

The scenes as he sunk the winning putt were only bettered by a touching reunion with his mum and children.

Tiger shared a special hug with his son Charlie after walking off the 18th green.

It was a moment that replicated a hug Tiger shared with his late father Earl after winning his first major at Augusta in 1997.

Jason Day was the best of the four Aussies in the field, overcoming back problem to shoot a five-under-par final round and finish tied for 5th place, two shots behind Tiger Woods.

After jumping in and out of the lead earlier in the tournament, 2013 Masters winner, Adam Scott, ended in a tie for 18th.

Marc Leishman and Cameron Smith both struggled on Sunday, finishing over par for the tournament in a tied for 49th and 51st respectively.

Many Australians were robbed of seeing the incredible final round by bad weather, with the regular 9am (AEST) finish pushed forward to 4.30am.

Congratulations, Tiger! To come back and win the Masters after all the highs and lows is a testament to excellence, grit, and determination.

A big “well done” from me to @TigerWoods! I am so happy for him and for the game of golf. This is just fantastic!!! 👏🏼@TheMasters

I am literally in tears watching @TigerWoods this is Greatness like no other. Knowing all you have been through physically to come back and do what you just did today? Wow Congrats a million times! I am so inspired thank you buddy.