The Ashes Round-up: Khawaja and Smith make it advantage Australia 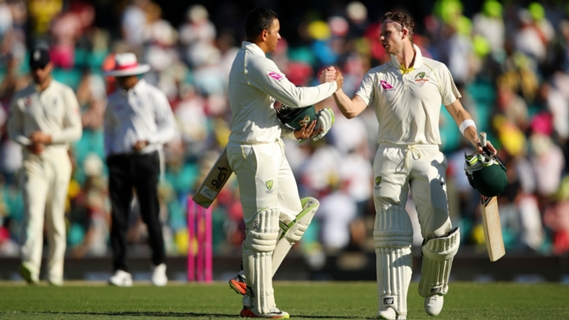 Usman Khawaja reached 91 not out and Steve Smith is unbeaten on 44 to leave Australia 193-2 in reply to England’s 346 at stumps on day two.

An unbroken century stand from Usman Khawaja and Steve Smith put Australia on top at stumps on day two of the fifth Ashes Test at the SCG.

Khawaja was 91 not out at the close of play, while David Warner scored a half-century and prolific captain Smith (44no) reached the landmark of 6,000 Test runs in his 111th innings – joint second-fastest on the all-time list with Garry Sobers and behind Don Bradman – as Australia recovered from 86-2 to 193-2.

Pat Cummins finished with figures of 4-80 earlier on Friday after Smith took an outstanding slip catch to remove Dawid Malan for 62, Australia bowling the tourists out for 346 on a good pitch as they eye a 4-0 series win.

– Broad bowls Cameron Bancroft without scoring and James Anderson snares David Warner (56) caught behind, but an unbroken partnership of 107 from Khawaja and Smith makes it advantage Australia.

MOMENT OF THE DAY

Smith was left red-faced when he dropped Alastair Cook in the fourth Test at the MCG, the England opener going on to make an unbeaten double century.

The skipper also put Malan down for 34 on day one in Sydney, but made amends by plucking a stunning one-handed catch diving low to his left to send the left-hander on his way early on Friday.

– England have never lost when posting 340 plus in their first innings at the SCG (won 10, drawn three).

– This is Khawaja’s highest Test score against England.

Try as they might, the England bowlers were unable to see the back of Smith yet again on day two.

Although desperate to get rid of Khawaja as he closes in on a first Ashes century, the tourists will know if they are unable to dismiss the prolific skipper before too long on Saturday they could be facing a substantial deficit.

Australia should be optimistic of opening up a good lead on an excellent pitch even if they do lose their leader early on after laying solid foundations.