Slice of Perth – shaking up the Perth breakfast scene with barbecue

This place has no fixed location, no fixed dates and definitely no menu. This is “underground barbecue” in Perth.

We’re not talking about a couple of lamb chops and a pack of thin sausages on a six-burner gas barbie. This is low and slow American style barbecue originating in the southern states like Texas.

Fans of Big Don’s Smoked Meats find out when and where he’ll be cooking up a storm via his social media . Those in the know get in early and he has legions of fans that will follow him all over town.

After falling in love with cooking with wood, fire, coals and smoke, Donovan MacDonald ditched his job as a state manager for a supermarket chain and turned barbecue into a full time gig. And guess what? He’s never run it out of a bricks and mortar restaurant. He’s exclusively a pop-up operation that sees him slinging barbecue from his van and places like sporting clubs and sometimes from his headquarters in Bayswater.

While Don does everything from brisket to ribs to burgers, he’s upping the ante by dipping his toe into Perth’s breakfast scene. After ordering online, you’ll be sent the address of where he’s dishing up but you’ll need to get in quick as it sells out in a matter of days. 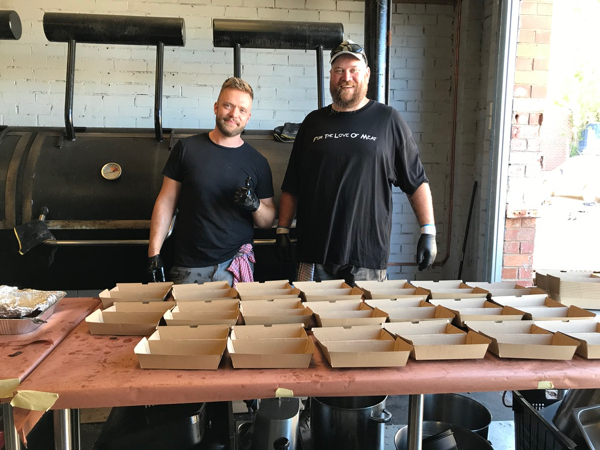 The brisket box is the main game here. Expect a brekky loaded with smokey brisket so tender it slices like butter, well seasoned mushies, roasted grape tomatoes and two fried eggs with rivers of gold for yolks. Don wastes nothing; making huge sausages with the trim off the brisket plus high melt cheese, cheddar and jalapenos – it’ll have you closing your eyes as your chew while thinking “WOW”. A flour tortilla is perfect for making up your own little breakfast taco. 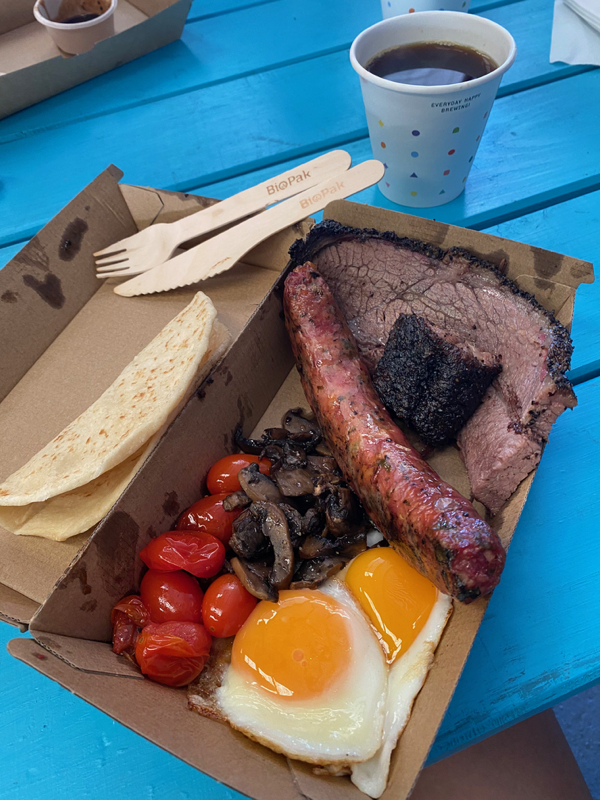 A beef rib bigger than your hand comes served on a bed of house-made pickles. Black bark covering the meat might be alarming to the untrained eye but this is right on the money. On paper, a simple rub of salt and pepper sounds like it will be harsh tasting but there’s a very scientific process working here. Don explained to me that at 70 degrees the fat renders down and caramelises the pepper. In the last couple of hours of the long slow cook, smoke over the top creates the blackened “bark”. What’s left is soft tender meat with a mellow peppery, yet smokey flavour. When people talk about meat that “falls off the bone” – Don’s beef rib is sitting pretty as exhibit A. 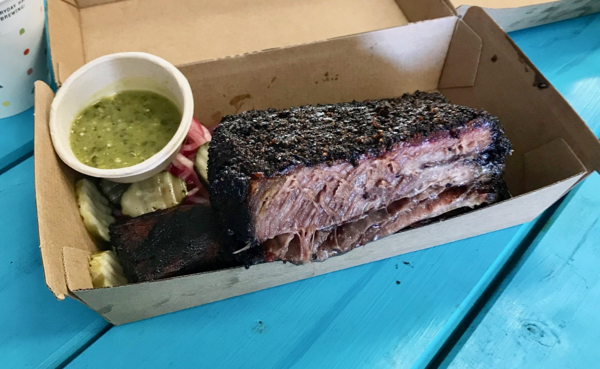 Don’s genius doesn’t stop at the hot coals. He also makes own sauces including a bright tasting tomatillo salsa verde that packs a punch. It marries perfectly with the beef rib or brisket.

Breakfast barbecue is a major commitment. A cook like this can take up to 20-24 hours from start to finish with Don getting to bed around 11pm and then back at headquarters at 4am to get the snags and eggs ready.

Despite wanting a tinnie to wash this all down with, there is batch brew on offer from local roaster Twin Peaks. It’s a smooth cuppa that won’t need any milk. 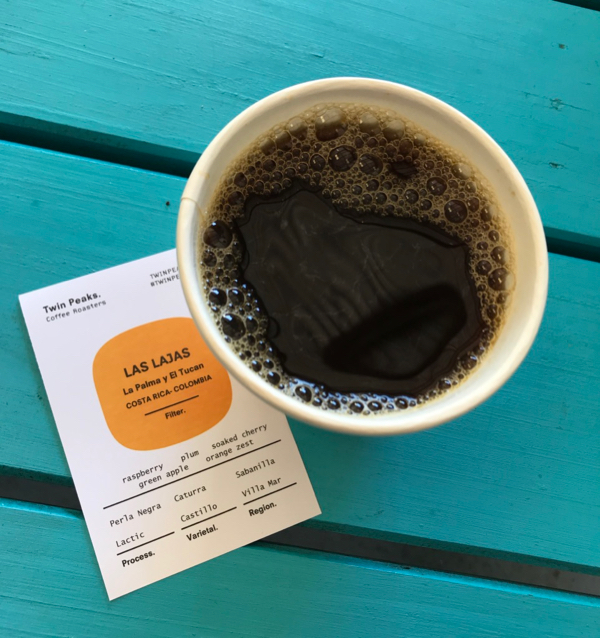 This isn’t a brekky for the fainthearted, don’t pre-load with a cheeky bowl of cereal or a slice toast… come hungry, expect to get the “meat sweats” and leave so full you won’t need to eat lunch.

Don hopes to make these “underground barbecue” breakfasts more regular, so keep an eye on his Instagram for announcements and make sure you get in early.