Riots in Missouri over Ferguson verdict 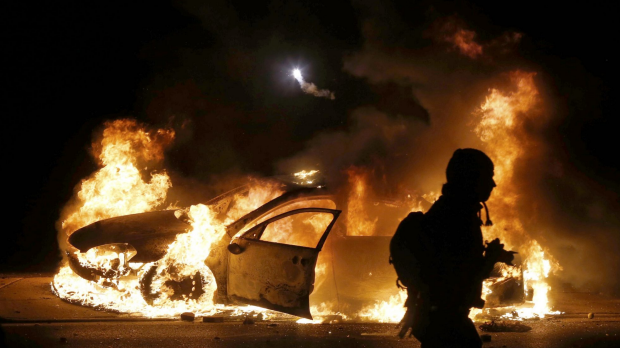 Ferguson, Missouri: The initial response by a group of about 200 activists, protesters and residents to the news outside the St Louis County Courthouse in Clayton was almost sedate.

Without an official announcement, word spread of the grand jury ruling in the Michael Brown police shooting as the crowd milled about a contingent of television news trucks. Some protesters begin to chant "Hands up, don’t shoot!",  a catch-cry for many protesters. Most had been standing in near-freezing conditions for hours outside the court.

Many people I spoke to had expected the result of the grand jury’s deliberations. Some took a moment to process the ruling and what it might mean for their already divided community.

"To be honest, I’m not surprised," Ferguson resident Olivia Charton told me outside the court. "We knew this was going to happen ? this has been happening to African-Americans since the beginning of time."

Some, such as Reverend Cleo Willis snr – who has been arrested three times at different protests since first taking to the streets in August ? also believe we are about to witness the worst looting, destruction and violence yet in Ferguson. There are many angry young African-American men in the community and they are ready to cause havoc in Ferguson, he says.

"When we shut down Highway 70, in my jail cell . . .  there was a whole lot of us in there and one brother said to me ‘let me tell you Reverend, we going to be marching with you non-violently but when the verdict comes down there isn’t going to be a foundation for you to march on because we are going to tear Ferguson up."

A 20-minute drive north of the affluent white suburb of Clayton and it looks as if the young man’s promise is coming true. I am standing on Florissant Avenue in Ferguson and the protests have quickly turned violent. I watch a white man loaded onto a stretcher and into an ambulance. He is surrounded by about a dozen police. Shots ring out in the night. It is 10.30pm and the situation is quickly escalating.

A fire is burning further towards Ferguson Police Station, some 500 metres from where I’m standing. I can see the smoke more clearly when a police helicopter does a low pass with its spotlight cutting through the haze. Police sirens are blaring.

I turn around and am amazed to see 50-odd riot police in line standing, ready to march down Florissant Avenue towards the flames. The riot police are predominantly white officers. A group of young African-Americans yell abuse at them and taunt them.

It’s not safe here. I can feel the tension.

"At the end of the day, they going to do what they do," a young African-American says as we watch the ambulance pull away with the injured white man. "All I can do is just hope for the best, hope justice is served at some point."

The rest of St Louis is sleeping, but Ferguson is a war zone. I drive slowly south down Florissant Avenue between nervous police officers and their vehicles, which are almost blocking four lanes. Many eyes are on me ? I stop and raise my hands at one point before pulling away with relief. In Ferguson, everyone is a suspect.