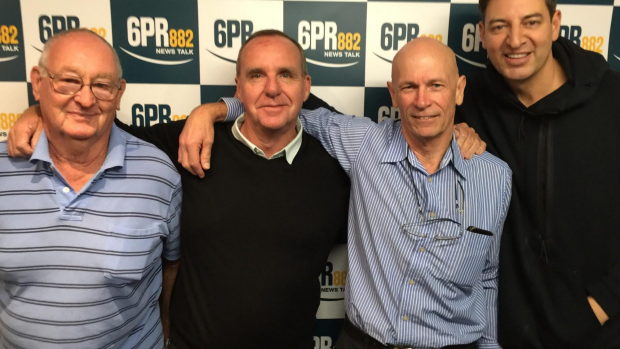 Remarkable. Bruce rescued a ten-year-old boy off Scarborough Beach 54 years ago… Today in the studios of 6PR, Bruce and that little boy John – were reunited.

I have one Wish that I would like to come true

It was back in 1961-62 when I was a member of the Scarborough Surf Club I saved a couple of people while not on duty with the club.

Early one Sunday morning at the start of the Season my mate (David Mcmurtry) and I were standing outside the front door of the Old Scarborough club house when a young fellow about 10 years old ran up to us and asked us if we could help his mate who was in trouble about a mile down the beach.

We obliged with the request and took off running towards Brighton Rd. We had gone about a mile when I asked the youngster where his mate was. He pointed and said see those people on the beach well that’s where he is.

On arriving where the people on the beach were, I was amazed to find a police officer mounted on his horse who promptly told me to get in the water and save the young fellow in trouble, with my eyes still trying to focus I began looking for the swimmer in trouble, I finally caught sight of him about 100m off shore so I proceeded to go and get him.

Any way to cut a long story short we managed to get him back to the shore and all was well.

I didn’t get to meet the young fellow I saved.

Another incident happened in 1962.

The boys and I from the surf club were setting the beach up for the Commonwealth Games carnival because of the Duke of Edenborough was coming to see the carnival action.

Suddenly we heard a terrible scream coming from the direction of the beach (we downed our beers in quick time and took off) it was blowing an Easterly Breeze and there was quite a big swell running at the time, I donned the belt when I spotted the person in trouble I made my way towards her I was dumped a couple of times going out.

I collected the young girl and brought her back to the safety of the beach but got dumped a couple more times when coming in, being pretty exhausted I sat for a while to get my breath back.

I didn’t get to meet the young Lady I helped either.

Both recues I made were never recorded by the club. There was no patrol for the first rescue. The second rescue patrols had finished for the day

To this day I do not know who the two people were that I rescued I would like to meet them.