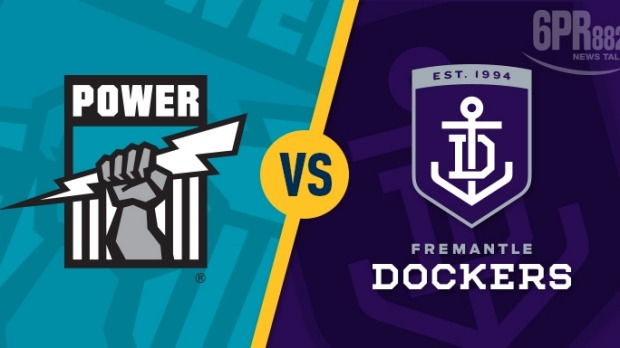 Fremantle have succumbed to a massive 89-point loss to the Power at Adelaide Oval on Saturday afternoon.

The Power stormed into the game with two quick goals and then continued to put the boot in kicking six goals before Danyle Pearce kicked the Dockers first goal. That trend continued throughout the game with the Power in charge from start to finish for their 22.13 (145) to (56) victory.

“Their midfield is putting little, to no pressure on the ball carrier” Brad says of Freo#AFLPowerFreo

Robbie Gray dominated the goal kicking with six majors and Port Adelaide debutant, Sam Powell-Pepper was impressive with his 25 disposals.

Nat Fyfe and Brad Hill tried to keep their team in it, giving their team a couple of highlights in the last term and Lachie Neale also made appearances for his 32 disposals and goal.

Fremantle coach, Ross Lyon, backed his losing side from last week with no changes made to the squad.
Port Adelaide included Jarman Impey after their win over Sydney in the opening Round, while Hamish Hartlett was a late withdrawal.


“We spoke about it at half time, we’d been playing well, we just wanted to finish off the second half and play four quarters of footy and we did that really well,” Sam Gray told 6PR after the game.


“We know we’ve got our work cut out for us because they’ve got an amazing midfield,” Port Adelaide Assistant Coach, Matthew Nicks, says of Fremantle…


“We’d like to move it a bit quicker, we’d like to change the direction of the ball a little bit more,” says Fremantle assistant coach, Mark Stone…