Pie Man: it was “corporate bullying” 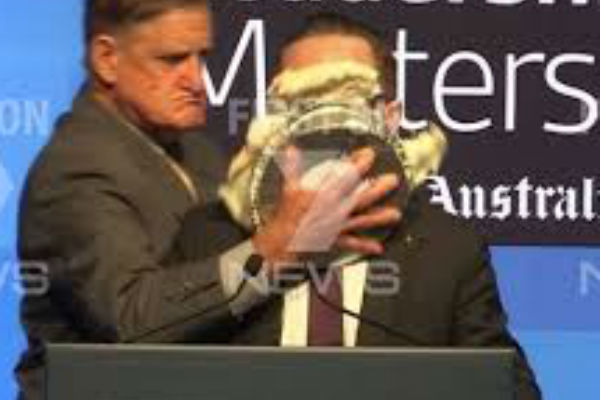 The man who made headlines yesterday after hitting QANTAS CEO Alan Joyce in the face with a cream pie says it was a matter of corporate bullying.

Tony Overheu spoke with 6PR’s Breakfast show first about the incident and told Steve and Baz he purchased the pie on Monday night, the night before Alan Joyce gave his speech at the Hyatt in Perth.

Mr Overheu was sympathetic with his choice of pies saying: “Lemon Meringue appeared to be the softest and least likely to do any injury,” he told Steve and Baz.
“I bought the cake the previous evening popped it in my work ute that I own at 6 o’clock yesterday morning. Drove from Willetton, parked in the bottom street below the Hyatt, had the cake wrapped up like a birthday present just to make it compact, walked in the front door… waited for a couple of hours until everyone had come in.”

In a statement he provided to 6PR Mr Overheu said:

Qantas is insulting many staff and passengers with their boarding pass propaganda.

What Airbnb is doing in Canberra airport is highly offensive.

The blatant bullying and extortion of Coopers Brewery was totally reprehensible.

CEOs need to respect Australia is a democracy where backdoor attempts to subvert the clear wishes of the overwhelming majority will cost companies bottom lines.

Alan Joyce is paid $13 million to run airlines not bulldoze Australia socially against its will.