‘If it’s issues to do with workmanship, then that’s a culpability on us’: Alcock

WA’s largest builder has admitted his company changed the way it installed ceilings in residential homes in 2009 after concerns the previous method was leading to failures.

Dale Alcock’s Webb & Brown Neaves has written to homeowners notifying them that the incidence of ceiling failures is increasing and offering free inspections.

But the letter says the cause of “most” ceiling failures is inappropriate access to roof spaces, for example to install airconditioning or ceiling fans.

The letter did not mention the previous poor quality installation method.

Mr Alcock says he will now review the communication and has pledged to fix ceilings – at his company’s expense – if ceilings have failed where inappropriate access is not an issue.

In the meantime, the Department of Mines, Industry, Regulation, and Safety is urging people to heed the warning signs of faulty ceilings before they collapse.

The Department first became aware of a potential issue regarding ceiling failures in 2017 prompting an inspection of 12 affected properties.

Director of Building Compliance Sandy Randall says it appears there’s an issue around the application of glue for homes built between 2004 to 2008.

Changes were made to application methods in 2007.

Ms Randall says while it appears to be a more common issue than first thought, it’s unlikely to impact all houses built during that time.

“I think if you have a look at that in the context of the number of homes that are built each year it still is a very, very low rate,” she told Gareth Parker.

“We’ve been saying for the last couple of years, it’s far better for people to recognise early warning signs and get some remediation work done at that point than to wait until it falls down.” 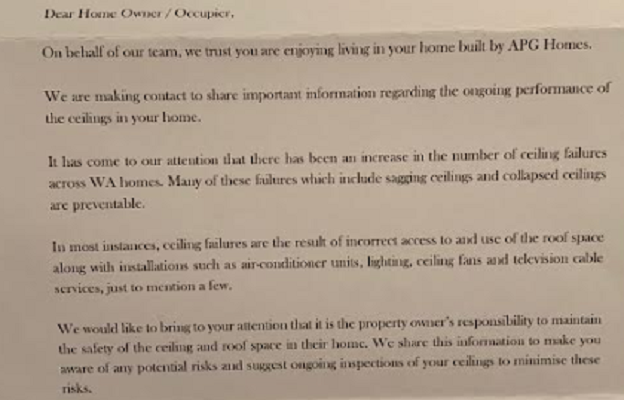