The man who tried to help Police during Friday’s Bourke Street terror attack has been crowned a hero for ramming a trolley into the attacker multiple times, but he broke his phone in the process.

A local charity group tracked down “Trolley Man” and found he was homeless and now phone-less, so they started up a GoFundMe page to crowd fund $1000 to help him, just over 24hours later over $100,000 had been raised by the public.

Donna Zen is the founder and director of the National Homeless Collective and says Michael “Trolley Man” will receive all the money, but he will be guided.

“We’ve got a duty of care to make sure Michael’s ok and sudden windfalls like this can sometimes cause more harm than good so we have an amazing accountant.. so they’re going to help Michael with the money,” Ms Zen told 6PR Breakfast.

You can add to the tally by heading to gofundme.com/thankyou-trolleyman. 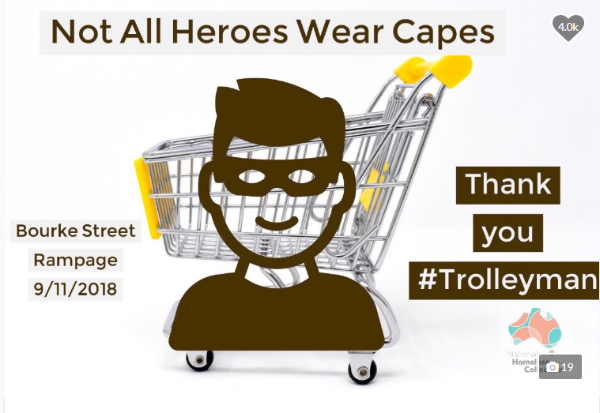