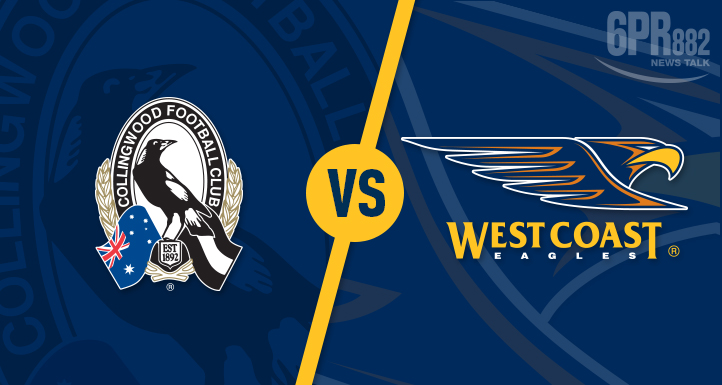 The West Coast Eagles, fresh off a 91-point Derby win last weekend, will host Collingwood – who have had a rare patch of bad form, losing their last two matches – in a Grand Final Replay to kick off Round 17.

The Eagles have won the last four meetings between the two sides, including the 2018 Grand Final and their match-up in Round 3 at the MCG.

The Eagles have brought in Tom Cole and spearhead forward Josh Kennedy, who was a late withdrawal last week due to illness. Both Liam Duggan and Brendon Ah Chee are out injured after last week’s match. Jimmy Williams spoke to WCE assistant Jaymie Graham ahead of the match, and spoke about Kennedy’s return, their preparation throughout the week, and Jarrod Cameron’s role in the side this week.

Collingwood have three omissions after their loss to Hawthorn last Friday night, with Matt Scharenberg, Josh Daicos and Josh Thomas all dropped this week. The Magpies have brought in Levi Greenwood, Ben Crocker and John Noble, who is making his debut after being picked up in the mid-season draft. Jimmy Williams spoke to assistant coach Robert Harvey before the match.

Jack Darling has kicked the opening goal for the Eagles before Collingwood have even got their hands on the ball, taking a mark and kicking truly inside the first minute of play. It has been a see-sawing first quarter, a close contest that is to be expected of two of the premier teams in the competition. The first term saw the lead change five times, and while Mason Cox and Brodie Mihocek had two apiece for Collingwood, it is Jarrod Cameron who has picked up where he left off last week, kicking three goals in the first quarter for the Eagles. Jack Darling, who kicked the first goal inside a minute, kicked a goal in the last minute of the quarter (his second) to give the Eagles a 2-point lead. A high scoring affair, the home side is winning 6.3.39 to 6.1.37

Both Darcy Moore (Coll) and Jamie Cripps (WCE) were both taken down to the rooms midway through the first quarter and both are yet to return at quarter time, Cripps in particular looking very uncomfortable and unable to walk, assisted from the ground by Eagles medical staff.

The Eagles are starting to win the arm wrestle in the second term, this time Elliot Yeo kicking a goal within 40 seconds of the bounce to resume play. For the second quarter in a row the Eagles have got the jump on Collingwood and scored early.

Jimmy Williams on the boundary has reported that Darcy Moore has been ruled out for the remainder of the game with a hamstring injury, he has a history of soft-tissue injuries throughout his career and he will take no further part in this game.

Jamie Cripps has a reported adductor strain and will not take any further part in the game. Despite his injury, the Eagles still hold a lead at halftime 10.4.64 to 8.3.51. Cox and Mihocek are leading the way for Collingwood with 3 Goals each, with singles to Phillips and De Goey, while for the Eagles, Cameron has four with support from Darling (2), Yeo (1), Allen (1), Hickey (1) and Ryan (1).

Neither team has been able to break away in the match, but the Eagles have held onto their lead take a 16-point lead going into the last quarter. Collingwood haven’t led since the last minute of the first quarter, but have kept themselves within distance. The “usual suspects” have been getting lots of the footy tonight, Adam Treloar with 26 touches at 3QT for the Magpies while Andrew Gaff leads all comers with 29 possessions.

The Magpies had the last five scoring shots (five behinds) before Mihocek takes a great mark and kicks truly, the first goal of the last quarter coming after almost 10 minutes of play, and it brings the lead to 7 points.

A quick fire finish from De Goey makes it two in a row, and this is anyone’s game as the Pies draw within one point. Another behind from Aish has scores level, and the Eagles will need to find a spark as they are holding on valiantly, but starting to be overrun by Collingwood in the play.

Collingwood hit the front late in the match and stay there, taking the win by a point at Optus Stadium. They hadn’t lead since the final minute of the first quarter, but they were in front when it mattered after a valiant final quarter. They outscored the Eagles 18-1 in the last quarter.

A memorable win on the road, Collingwood overtake the Eagles for second spot on the ladder with a superior percentage. The final score reads Eagles 12.5.77 to Magpies 11.12.78. It only adds to the rivalry that has been building over the last few battles between these two sides. Brody Mihocek finishes with 4 goals for the winners, while Cameron had four for the Eagles, all kicked in the first half. Adam Treloar was a big part of the fourth-quarter fightback, with 13 touches in the term to bring him to a game-high 39.

The coaching press conferences were brought to us by Perth Energy, and we heard from both Adam Simpson and Nathan Buckley after the match

The Eagles now travel to Alice Springs to play Melbourne next Sunday, while Collingwood will play against Greater Western Sydney next Saturday at Giants Stadium. They are equal on 44 points, with Collingwood sitting higher on percentage.