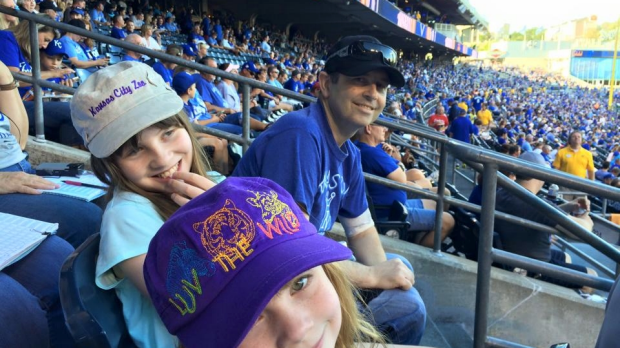 It started with an unusual pain in his chest and only a few months later, a Perth father-of-two has found himself in a battle for his life.

In April, Carl Adams was diagnosed with a ‘double hit’ of non-Hodgkins lymphoma – a particularly aggressive form of the disease.

‘They found a few spots which were the tumours in his rib cage wall,’ sister-in-law Candy Adams told Chris Ilsley.

After the first course of chemotherapy didn’t deliver the desired results, he consulted experts in the eastern states.

‘He went to Melbourne where they do a lot of [medical] trials… they told him he was ineligible and that ‘there was nothing else in Australia they could do for him,’ Mrs Adams said.

Initially, doctors told him he was only expected to live until October.

‘There was a trial in Kansas City that he flew over for and he has gone through a very vigorous screening process where they remove his cells and send them to Philadephia and mutate them,’ Mrs Adams said.

‘When they put them back into his body, which is going to happen in the first week of November, those cells kill all the [cancer] cells in his body.’

The procedure itself can be deadly and, if successful, will require ongoing treatment.

‘Carl needs a stem cell transplant after this has finished to try and keep him in remission. Unfortunately, Scott [his brother] is not a match and being a blood relative he should be the closest match possible.

‘Out of the registry of 22 million… none of them are a match.’

Mr Adams’ wife and children are currently with him in the United States, but his extended family are lending their support from home turf.

Led by sister-in-law Candy Adams, close to 100 people have agreed to submit to a quick blood test on November 2 at Maccabi Soccer Club in Yokine to find out whether they could be the miracle match.

‘It’s also done through the Red Cross, [you can] go to your nearest blood centre. You could also call the number 13 14 95 or visit abmdr.org.au which stands for the Australian Bone Marrow Donor Registry,’ she said.

‘When you donate your blood, or if you go directly to the bone marrow donor centre, they will put you on a donor register.’

To join the register, potential donors need to be aged between 18 and 45.

Listen to the full interview below: