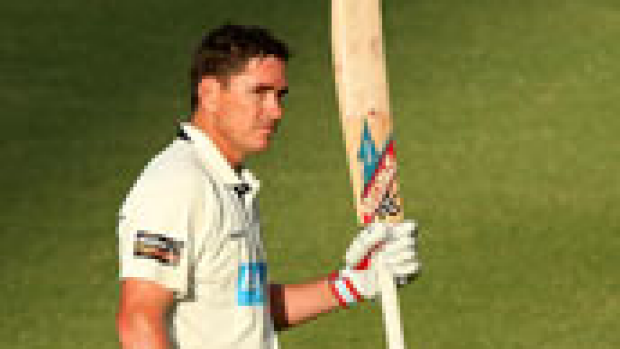 Normally, a cricketer is scrapping for runs when he realises it’s time to retire. For former Test opener Marcus North, it was the complete opposite.

North was in the form of his life this summer, plundering 886 runs at an average of 63.28 to lead the Warriors to their first Shield final in 15 years.   The runs were flowing freely for North, and life should have been easy.   But it wasn’t. It was mentally exhausting to keep up his form.

It got North thinking: ‘If it’s hard now, what will it be like if I go through a lean patch next season?’   It was a question that grated away at North for several months.   Eventually, he realised what he had to do – retire.

An emotional North fronted his Warriors comrades on Thursday morning to tell them of his decision to retire from Australian first-class and 50-over cricket.

The 34-year-old plans to honour the final year of his contract with Big Bash League side Sydney Sixers.

But his immediate focus is on shifting his family to the UK, where he will pursue business interests in the wine industry while also playing limited stints in county cricket.

North hopes a coaching career awaits him in the future, and the county set-up in England will give him the chance to dip his toe in that area.

The elegant left-hander doesn’t hold any regrets, but admits he may not have fully cashed in on his undoubted talent.   He scored five centuries in 21 Tests for his country, but was dumped after producing a string of low scores in series against Pakistan, India and England in 2010.

North’s career hit rock bottom last summer when he was dropped to grade ranks due to poor form.

But in a sign of a true champion, North bounced back from those setbacks, reinventing himself as an opener to play a crucial role in lifting WA to their first Shield final in 15 years.

Although the Warriors failed to fire in the decider, North still feels like he’s bowing out as a winner.   ’I’ve thoroughly enjoyed the journey,’ North said.   ’To finish on a year I’ve had this year has been extra special. It’s been an added bonus.’

North’s retirement will leave a massive void at the top of the WA order.   But with rising stars Cameron Bancroft, Marcus Harris, Mitch Marsh, Ashton Agar, Sam Whiteman and Jason Behrendorff in the Warriors’ outfit, North is confident the Justin Langer-coached side will continue to flourish.