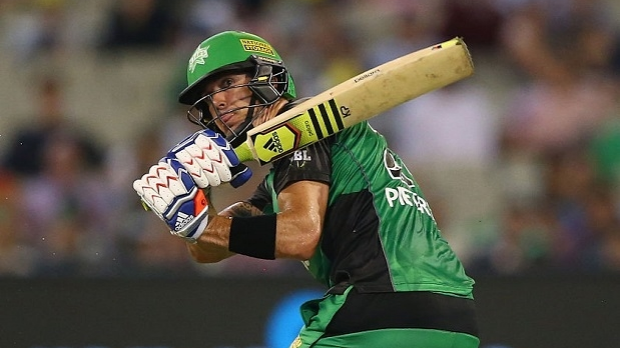 The Melbourne Stars have shaken their Big Bash League monkey off their backs.

Having lost their four previous semi finals, the Stars dumped the reigning champions Perth Scorchers out of the BBL05 title race with a convincing victory at the MCG.

The seven-wicket win in front of a crowd of 30,174 means that the Stars will be back at the MCG on Sunday night to take on the Sydney Thunder in the season decider with both teams eyeing off their first BBL titles.

The loss means that the Scorchers, champions the past two seasons, will miss the Grand Final for the first time in BBL history.

They were runner-up in the first two seasons of the competition.

Set 140 to win, Kevin Pietersen celebrated signing his new two-year deal with the Stars this week by scoring 62 from 36 balls to guide the Stars to victory.

Pietersen hit five boundaries and two sixes before he was bowled by Joel Paris with victory in sight.

It was left to Peter Handscomb (15 not out) and captain David Hussey (7 not out) to hit the winning runs with 11 balls to spare.

Marcus Stoinis (44 off 41 balls) combined with Pietersen for a second wicket stand of 69 to steady their innings after the early loss of Luke Wright (7).

The Stars run chase was helped along by taking 31 off the final two overs of their power play – the fifth and sixth – bowled by Perth’s main strike bowlers Jason Behrendorff and Andrew Tye.

The Scorchers battled their way to 7-139 after being sent into bat. A 79-run stand for the third wicket between captain Adam Voges (52 from 40 balls) and Michael Klinger (44 from 45 balls) was the foundation of their innings.

The Stars’ attack put the screws on their innings in the final overs with paceman Dan Worrall continuing his excellent late-season form claiming 3-25 from his four overs, backing up his match-winning 3-16 in Perth in their final preliminary round match.

Spinners Michael Beer and Adam Zampa both claimed 1-22 from their four overs in impressive performances as the Scorchers collapsed late, losing 5-37 in their last five overs.

In what could be the final match of his decorated career, veteran Perth spinner Brad Hogg bowled a tidy spell to finish with 1-20 from his four overs.