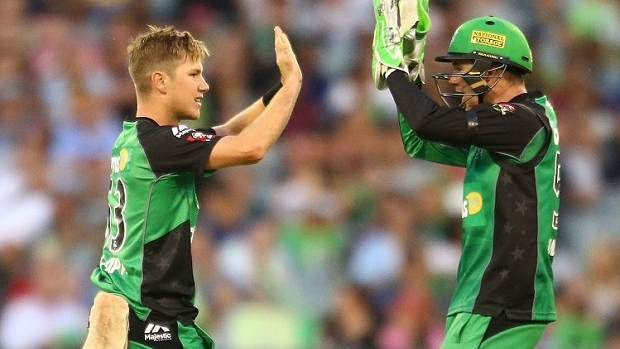 The Hobart Hurricanes weakness against spin bowling was again laid bare as they crashed to their second consecutive BBL05 defeat against a Melbourne side.

After being thrashed by the Melbourne Rengades in Hobart on Monday night, the Hurricanes have dropped out of the top four and their net run rate took another hefty hit after losing to the Stars by eight wickets at the MCG.

Hobart has been replaced inside the top four by the Stars, who will now prepare for the return derby against the Renegades at Etihad Stadium on Saturday night.

After losing their opening two matches, the Stars have now won three games in a row.

Set 125 to win, the Stars recovered from an early stutter through the losses of Marcus Stoinis (10) and Kevin Pietersen (1) with Luke Wright and Glenn Maxwell steering them to victory in front of 33,603.

The pair combined for an unbeaten 99-run third wicket partnership as the Stars reached their target with five overs to spare.

Maxwell finished unbeaten on 56 from 32 balls with three sixes – his second half-century of the tournament – while Wright backed up his unbeaten 109 against the Renegades last Saturday night by finishing 51 not out with five boundaries.

The Stars took the lead of their cross-town rivals the Renegades by opening their bowling with spin at both ends – six of the first eight overs of the Hurricanes innings were bowled by slow bowlers.

It was once again left to George Bailey (55 off 40 balls) to salvage the train wreck of Hobart’s innings after another poor start where they slumped to 4-31 inside their power play.

It was Bailey’s third half-century in six innings of BBL05 and he combined with Jono Wells ( 22) for a record equalling fifth wicket partnership of 67.

But when both were dismissed within three balls of Adam Zampa’s last over, and the 16th of the innings, the Hurricanes hopes of setting a target of 150 were all but blown away.

Zampa claimed 2-18 with his leg-spin. One of those was a fortunate stumping by Peter Handscomb, with the ball bouncing back off the wicket keeper’s chest and onto the stumps to catch Wells short of his ground.

Paceman Scott Boland claimed 2-26 to finish off the Hurricanes innings.

Boland was on a hat-trick but, as if to sum up the Hurricanes night, No.11 Shaun Tait blocked the ball and was then run out by David Hussey off the final ball of their innings.