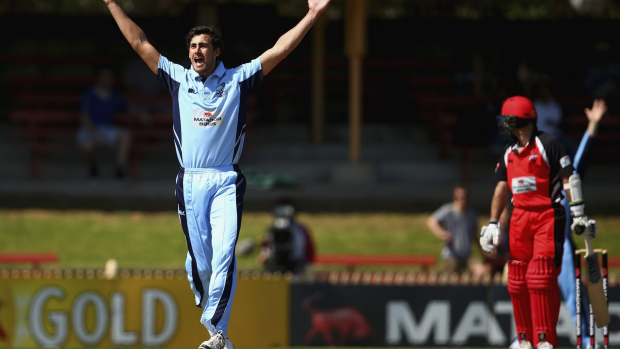 After the smashathon 2014/15 Madator Cup where the batting per over rate spiked to 5.30 for the tournament. The bowling fraternity breathed a collective sigh as juicier and tackier wickets saw the run rate come down to a respectable 4.90 runs per over. And bowlers of different varieties found conditions to their liking I have a look at the top 3 wicket takers.

I’m not sure what the collective noun is for a group of left arm quick’s but I’m going with a Pride. And the Mollydookers Pride was strong in the Madator Cup with Messrs.’ Behrendorff, Paris, Johnson and co doing a fine job. But the king of the Pride who roared loudest was undoubtedly the Blues Mitchell Starc. In just 6 games he swung out an unbelievable 26 batsman at the Under 12s cricket bowling award average of 8!!

He is such a potent force swinging the new ball from over the wicket and older ball from around the wicket. His modus operandi is Attacking the stumps and even thou batsman know the swinging Yorker is coming the utterly powerless to dig it out.

If he can work on his defensive bowling skills in the period in between new and old ball swing he is going to be a dominant Test match bowler this summer.

One of the more entertaining Tweeter’s in the Australia cricket circles is South Australian Kane Richardson. Never short to pull up a teammates fashion sense or mishap to the Twitterverse

But after the recent tournament A hastag might be #GetRichoBackInAussieOneDayTeam after an excellent cup saw him take 15 wickets at an average of 22 with his bouncy late moving inswingers. And he makes the ball swing very late which tests the opposition defenses and is trending a big reputation for his ability with death bowling closing out innings with a mixture of Yorkers and slower balls.

Like the Left arm quick’s I’m unaware of the collective for left arm spinners like O’Keefe, Agar and Andrews are but I’m leaning towards a paddling. And the prominent LAO of the Madator Cup was the Bushrangers Jon ‘Duck’ Holland. Injuries and spin competition from Glenn Maxwell and Fawad Ahmed has restricted the ‘Ducks’ cricket progression so far in his career. A clever bowler with good accuracy and excellent drift and changes of pace that keeps the batsman guessing and old Victorian cricket fans of Ray ‘Spotty’ Bright in raptures. And with 14 wickets at average of 17 with a tight economy of 4.09 certainly spun his name back to Australian selectors.