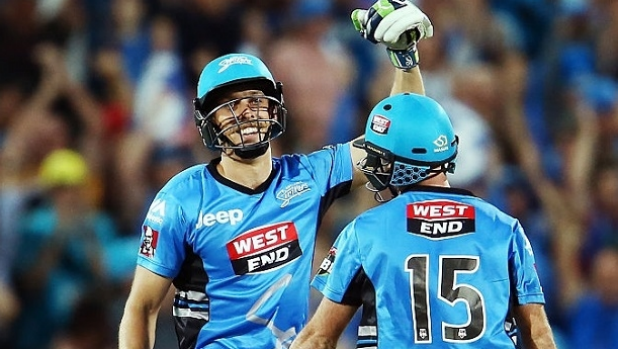 It’s the stuff of fairytales.

But Jake Lehmann lived out every young boy’s dream by smashing a six off the last ball of the match to give the Adelaide Strikers a stunning victory over the Hobart Hurricanes to seal a home semi-final for the second straight BBL season.

Lehmann, the son of current Australian coach Darren, strode to the wicket with the Strikers needing four to win off the last ball, having not faced a delivery in his previous two Twenty20 games.

But Lehmann deposited Simon Milenko over the boundary as the crowd of 49,115 erupted – and his dad proudly tweeted from a hotel in Brisbane watching the action unfold.

The story of the finish will no doubt be told over and over again at the Lehmann family dinner table for years to come.

The six-wicket win lifted the Strikers back to top spot on the ladder.

Tim Ludeman batted through the innings to finish 57 not out from 58 balls with cameos from Jono Dean (15), Travis Head (25) and captain Brad Hodge (28).

Ludeman overtook Michael Klinger during his knock as the Strikers’ overall leading runscorer in their Big Bash League history.

Set 144 to win, the Strikers looked to be on track early in their innings. But the Hurricanes bowlers, led by Milenko (3-25) and spinner Clive Rose (0-14), fought back in the middle overs to put the brakes on their scoring.

The Strikers needed 34 off the last three overs and 12 from the final six balls bowled by Milenko.

Amazingly, Milenko had not conceded a boundary until he delivered the fateful final delivery.

Earlier, the Hurricanes batting once again collapsed after captain Tim Paine (45) and Michael Hill (32) guided them to a strong position at 2-93 after 12 overs.’

But Paine was run out attempting to take on the strong arm of Michael Nesser and then Strikers’ leg-spinner Adil Rashid (2-16 off four overs) turned the match by grabbing the key wickets of Dan Christian (8) and Jono Wells (20).

The Hurricanes lost 6-23 in just over four overs and were bowled out for 143 with three balls remaining in their innings. It was the third time in eight innings this season the Hurricanes had failed to see out their 20 overs.

Sri Lankan star Kumar Sangakkara continued his horror run with his fourth consecutive single figure score (4) after being promoted to open the batting.

Greg West claimed 2-24 from his four overs on debut while Ben Laughlin (2-31) and Nesser (3-26) also chipped in throughout the innings.