I get to get my first wicket twice! Curran upbeat after no-ball woe 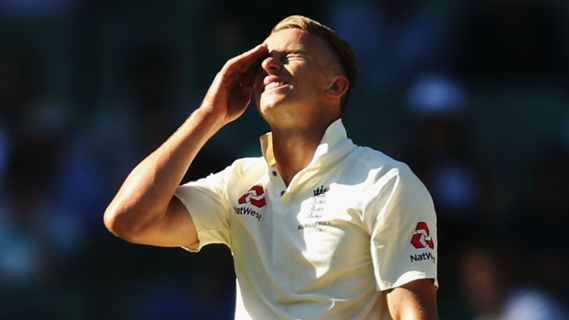 Tom Curran’s performance provided a positive for England on Boxing Day, but the seamer was “gutted” after a no-ball denied him a wicket.

An upbeat Tom Curran tried to focus on the positives after he was dramatically denied a maiden wicket on his Test debut at the MCG.

Called up to replace the injured Craig Overton in England’s line-up for the fourth Test, Curran looked to have ousted David Warner for 99 on Tuesday when the Australia opener miscued a half-hearted pull to mid-on.

However, the young seamer’s celebrations were cut short as the umpires checked whether he had been guilty of a no-ball and replays duly confirmed he had over-stepped.

Warner brought up his century from the next delivery before falling to James Anderson for 103, while Australia, already 3-0 up in the five-match series, went on to reach stumps in a position of strength on 244-3.

Reflecting on his no-ball woe, Curran told BT Sport: “Do you know what, I asked [the umpire] how my foot was the ball before that and he said half and half, just behind. So I moved it a little bit forward.

“I was obviously gutted. It was horrible, the worst feeling I’ve had, but looking at the positives, I get to get my first wicket twice!

“Let’s just hope we get the first one soon. Obviously it was disappointing to bowl the no-ball.”

Warner has been caught on a No Ball from first gamer Tom Curran. Amazing scenes at the MCG…Warner gets a reprieve… #Ashes

After a disappointing opening spell, Curran impressed later in the day to provide a positive on an otherwise challenging day for England, which ended with the prolific Steve Smith unbeaten on 65.

“I found out yesterday morning [that I would play], so it was a nice Christmas present,” Curran added.

“I slept ok, to be honest. I lay in bed for about an hour, your heart does get racing once you imagine how it’s going to go, but once I fell asleep, I slept right through.

“It was just an unbelievable feeling, to be out there playing, making my debut, it was just a very proud day. Hopefully, it’s upwards from here.

“I was disappointed with the way I bowled in my first spell, sat down at lunch and tried to come back stronger. It obviously went a bit better and hopefully it just gets better from here.”