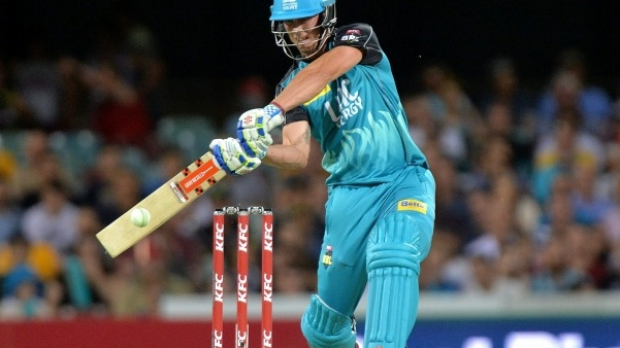 A stunning century to Brisbane Heat captain Chris Lynn proved in vain as the Hobart Hurricanes win another high-scoring thriller at the Gabba.

Set 195 to win after Dan Christian smashed the fastest half-centuy of BBL05, Lynn blasted seven sixes and five boundaries in a brilliant knock of 101 from 51 balls before he was dismissed in the 18th over of the Heat’s run chase by Hurricanes spinner Cameron Boyce.

Once Lynn departed, the Heat fell 15 runs short of breaking through for their first win of the season. They remain winless after four matches and almost certainly out of semi-final contention.

It’s the second century in the Big Bash League by a Heat player after Luke Pomersbach made an unbeaten 112 against the Melbourne Renegades in the semi finals of BBL02.

But it’s the first time a player has made a century in a BBL game but his side hasn’t gone onto win.

Earlier, Christian’s knock of 56 from just 24 balls helped blast the Hurricanes to 4-194 at the end of their 20 overs.

Christian smashed Heat paceman Luke Feldman for three sixes in an action-packed 19th over. The first six went onto the roof of the Gabba – estimated to have travelled 117 metres – and the second one was dispatched into the third tier of the grandstand.

The third six brought up his half-century as he added 67 for the fifth wicket with Darren Sammy in a furious flourish to the Hurricanes’ innings that was set up by Kumar Sangakkara (32), George Bailey (31), Tim Paine (27) and Ben Dunk (25).

Only West Indian spinner Samuel Badree (2-27 from four overs) was able to contain the onslaught as Feldman and Mark Steketee brew the brunt of Christian.

But Christian was almost upstaged by Lynn, who once again stood tall for his team with a stunning counter attack.

After the Heat lost openers Lendl Simmons (0) and Jimmy Peirson (1), Lynn teed off.

He added 79 for the third wicket with Sam Heazlkett, who made 26 in his Twenty20 debut, and continued to thrash the Hurricanes attack everywhere.

But as the required run rate continued to rise, Lynn ran out of balls and partners to get his team over the line.

When the big-hitting Ben Cutting fell for 13 in the 19th over, the Heat’s chances were dashed.