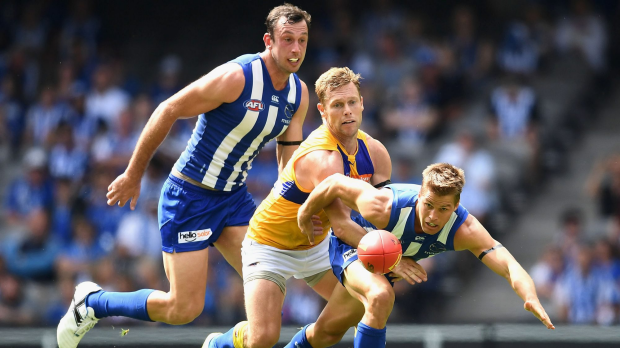 The West Coast Eagles have started their season with a convincing 43-point win over the Kangaroos at Etihad Stadium on Sunday afternoon but it wasn’t all good news for the Eagles with ruckman Drew Petrie suffering a major injury.

The back-to-back, reigning Coleman medallist, Josh Kennedy, kicked an impressive seven goals in the opening round to bring the Eagles up to their 21.10 (136) to 13.15 (93)

The Eagles new line up worked well with former Roo Drew Petrie and youngster Nathan Vardy in the ruck and their midfield recruit in Sam Mitchell also made his debut for West Coast and clocked up a massive 38 disposals.

The Kangaroo burst into the game with two unanswered goals within the first couple of minutes, and then the Eagles took a couple of hits with Petrie coming off the ground with a wrist injury and fellow ruckman, Vardy, soon joining him on the bench with a back injury.

But the Eagles soon answered back and Petrie returned to the ground, although he favoured one hand in the centre, and Vardy also recovered from a knee between his shoulder blades.

Mark LeCras opened the second quarter with two quick goals, while Andrew Gaff’s and Mitchell’s work through the middle kept delivering to the forward line for the Eagles one-goal lead a half time.

North Melbourne struggled around the ground; Robbie Tarrant had a tough ask against Kennedy, but at the other end Jarrod Waite’s inaccurate kicking [one goal, seven behinds] let his team down.

‘He has been really poor in the last three movements forward’
Karl says of Tarrant. ‘He’s chasing his shadow’#AFLNorthEagles

Nathan Vardy told the 6PR commentary team that North Melbourne’s Todd Goldstein has ‘a lot more tricks’ in the ruck and it’s something he could learn from.
Listen to the full interview here…

West Coast Eagles coach Adam Simson said ‘It was a pretty hard fought game, we’ve got some sore boys. In particular, I suppose, the first half was a fair bit of a grind.’
Listen to the full post game press conference here…


West Coast Eagles Assistant Coach explained Drew Petrie’s injury to 6PR’s Peter Vlahos.
‘He’s got a serious hand injury, I think it’s fractured… He was happy to come back on, there wasn’t much more damage that could have been done.’
Listen to the full interview here…