GAME DAY: Freo save the best for Pav 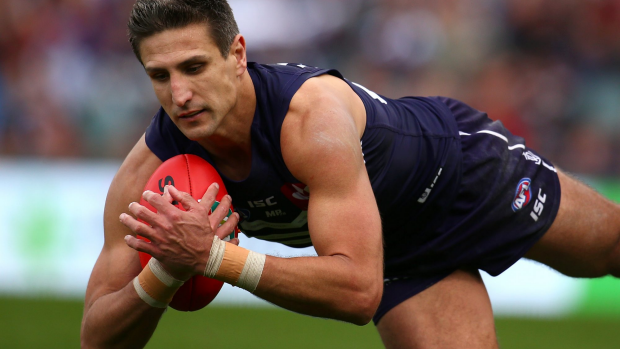 It was celebrations all-round for Fremantle, Matthew Pavlich kicking his 700th goal in his final game, Lachie Neale breaking an AFL record for the most possessions in a season and a hard-fought 20-point win over the Western Bulldogs at Domain Stadium on Sunday.

Although the Bulldogs got first points on the board the Dockers answered back early in the first quarter and kept the pressure on the Dogs forward line to run out 10.9 (69) to 6.13 (49) winners.

‘I don’t mind admitting, I’ve got a little bit of a tear in my eye. That was beautiful to watch.’ Peter Bell #ThanksPav #AFLFreoDogs

Pavlich was the one to watch throughout the game, although his 700th career goal came early in the first quarter after Shane Yarran passed the 353-gamer the ball, Pavlich then struggled to find the big sticks kicking three behinds, but he did clock up 20 disposals, 10 marks and two tackles.

STATS: ’32-21 tackle count. That’s where Fremantle have been exceptional this afternoon’ – Belly #AFLFreoDogs

Tory Dickson had a good game with his three goals, including two in the third quarter. The Bulldogs did have a scare with Matthew Boyd coming off the ground late in the first quarter with an injury to his left ankle but he returned the the ground and managed 35 disposals.

‘Last night I had a dream that I was going to give it [the ball] to him, but Yarran did’ – Michael Walters spoke with us after the game…

‘Great player and great person for the footy club and it was all about producing a good effort for him today and I thought we did that over the last four quarters,’ Aaron Sandilands says of Pavlich’s final game.

‘Really keen to get a good Summer under my belt and try and produce some consistent year next year, obviously frustrating missing so much this year and just hard to get that match fitness,’ Sandilands told 6PR.

‘Over time, the legend will only grow,’ Ross Lyon says.
Listen to the full post game press conference here…