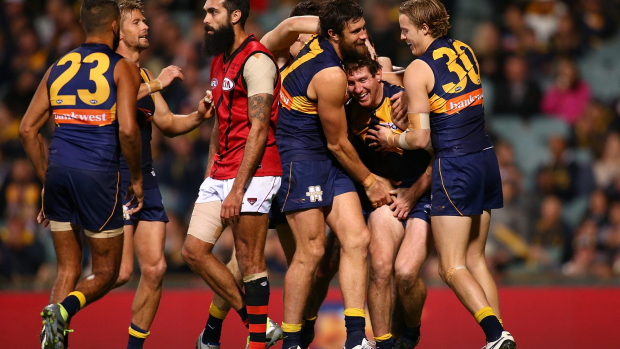 The West Coast Eagles turned around a quarter time deficit to complete a convincing 78-point win over Essendon at Domain Stadium on Thursday night.

Patrick McGinnity and Mark Hutchings sealed the deal for the Eagles in the fourth quarter with the pair going goal for goal while the Bombers only managed two-goals in the second half, including one after the siren for the 20.10 (130) to 7.10 (52) finish.

The Bombers got off to a flyer with a couple of quick kicks through the goals, but Josh Kennedy didn’t let his Eagles down with the forward answering back to get West Coast on the board.

Priddis gets a goal!
‘The last two goals came from a really good contest in the forward 50’ – Barlow #AFLEaglesDons

The Eagles picked up their intensity around the ball in the second quarter to make a 21-point turn around and take an 18-point lead at the main break.

It was a quiet third quarter for both sides, but the Eagles scrapped through a few goals to extend their lead while Essendon could only manage four behinds while they had an injury scare with Matthew Leuenberger limping off the ground, but he returned to the ground after a short break.

It was all the Eagles in the fourth as McGinnity and Hutchings took control and Andrew Gaff added to his tally adding a second goal to his 35 disposals for the game. Matt Priddis was slow to start but finished with 24 disposals.

‘We couldn’t get anything out of our stoppages, we probably got beaten there early on and just took us a while to that and get a feel for the game.’ Chris Masten

‘John’s [Worsfold] come in and changed a lot of things and the core ground who’s going to be here next year is really strong.’ Jackson Merrett spoke with our commentary team after the game.

‘We need to just keep learning and challenging ourselves to guts it out.’ John Worsfold’s press conference here…

‘We’re exactly where we need to be at the moment, we haven’t been good enough to beat sides above us.’ Adam Simpson’s press conference here…