Smoke from prescribed burns has blanketed the Forrest Highway near Old Coast Road causing the main artery between Perth and the South West to be closed until conditions clear.

Thousands of holidaymakers trying to make their way back to Perth may have their travel plans interrupted due to the closure, and returning traffic is already being diverted away from the smoke-affected area.

The WA Police vehicle check point on Forrest Highway was temporarily moved this morning as a result of the conditions.

“The smoke in the early hours of the morning proceeded to get worse, where the visibility presented a significant risk to the motorists and the people operating the checkpoint,” he said

He said motorists were still trying to maintain high speeds with low visibility.

“The smoke is extremely dangerous, we have already had two crashes as a result of this,” he said.

“In the interest of public safety we have decided to close it.”

Motorists are being urged to drive to the conditions and plan their journey. 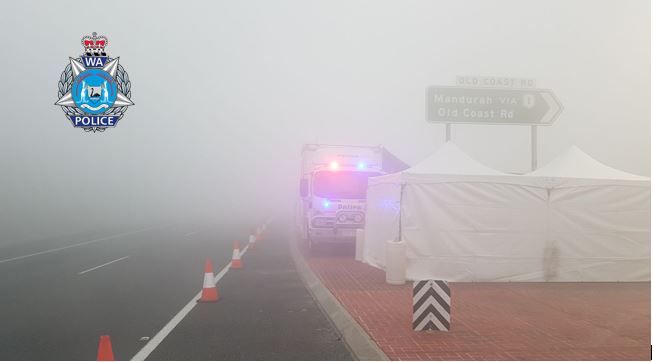