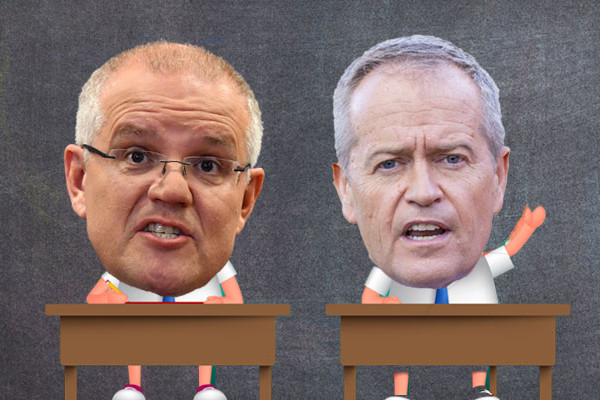 Each week of the federal election campaign, Macquarie Media’s Political Editor, Michael Pachi, assesses the performance of the Labor and Liberal leaders.

The Prime Minister is continuing to hold the show together as we approach the last week of the election campaign, but it’s obvious his campaign is running out of steam.

This could change on Sunday at the Liberal Party’s official election launch where it’s vital that Scott Morrison provides a narrative for the future.

Mr Morrison is confining his campaign to the government’s record of creating more than 1 million new jobs, tax cuts and a potential budget surplus next year.

But this isn’t enough. You can’t go four weeks talking about the potential risk Labor may pose to these things without providing any new ideas.

I’ve spent the past week on the Morrison bus and you can see that Mr Morrison is an effective campaigner. He gets along with people and loves being around them.

We saw this on Tuesday when we travelled to Albury in regional New South Wales for the Country Women’s Association conference. The crowd loved him, and the fact he was there with his wife Jenny helped. However, the need to visit a seat like Farrer, which is meant to be super safe Liberal territory is telling. Incumbent Susan Ley is in danger of losing to an independent, with locals angry at the government’s water policy.

Whether Mr Morrison’s appearance makes any difference remains to be seen, his visit certainly caused headlines. It was the news story of the night. A refugee activist tried to crack an egg on the Prime Minister’s head. The pictures showed Mr Morrison helping 70 year old Margaret who had fallen to the ground in the ensuing scuffle. The PM says the protest shows an ugly side to political activism and quite rightly there should be no room for this in Australian politics. It’s a sentiment echoed by the Opposition leader. The protest also raised questions about security around our political leaders. This time it was just an egg, next time it could be something more sinister. The Prime Minister’s office told me they didn’t seek a review following the incident and are satisfied with the level of detail around Mr Morrison, but at other public events since Tuesday’s fracas there has been a noticeable increase in the number of police around the PM.

Just like Mr Shorten’s campaign lost momentum on Tuesday due to the egg incident, Mr Morrison’s campaign had little cut through on Wednesday after some NewsCorp papers printed a story claiming Bill Shorten had omitted details about his late mother’s achievements. Mr Shorten has spoken many times about how his mum had a tough life raising kids and was a humble teacher on a modest income. He’s spoken before about her struggle to achieve her dream to be a lawyer. Mr Shorten retold his mothers story during an appearance on The ABC’s ‘Q and A’ on Monday, but didn’t mention she studied law later in life and practiced. The newspapers were heavily criticised for printing the story, with many arguing that it stooped to a new low. It robbed Mr Morrison of any oxygen for the day and instead of using his press conference to attack Labor policies. He had to condemn the story saying families should be off limits. Worse for the government it sparked the #mymum hashtag where thousands of people told touching stories about their mothers.

Mr Morrison tried to sharpen his pitch to business, but I’m not sure it succeeded. He claimed unions would have greater control over boardrooms if Labor wins the election. Fair enough, as business don’t want to be beholden to unions. However, I think he upset bigger companies by “categorically” ruling-out any further company tax cuts, or flagging further industrial relations reform. The PM could only say that he would do more to cut “red tape” and overhaul environmental rules to allow major projects to go ahead and hopefully create more jobs. The Liberals see business as their core constituency, but the sector has hardly spent any time really supporting the government.

This week I’ve again given Mr Morrison a B. As I have indicated over recent weeks, Mr Morrison has been able to keep the show together but the lack of a clear direction for the future is becoming obvious. The government has a good record on which to campaign on, but it’s one thing campaigning on achievements in government, it’s another providing voters with a clearer picture of what you hope to achieve if the party is given a chance to govern for another term.

Bill Shorten is clearly looking more confident moving into the final week of the campaign. He knows that by this time next week he will likely be Australia’s new Prime Minister, barring a catastrophic stuff-up from either him or his Labor team.

Mr Shorten has successfully batted away questions about the cost of his policies, claiming that removing tax perks and loopholes will achieve solid budget savings which can then be redirected into health, childcare and tax cuts for low to middle income earners. You may not agree with his policies or the method by which he’s trying to achieve them, but he is articulating a plan to do something in government.

Labor has also successfully navigated questions over their climate policy, which is ambitious and the real cost to the broader economy is yet to be determined.

I think the problem for Mr Shorten is trying to explain how he would implement his agenda if he has to deal with a hostile senate. His shadow treasurer, Chris Bowen says if Labor wins on May 18 they would have a mandate to implement their policies. I’m not sure it will be that easy given what we’ve seen over the past decade. Latest polling shows Labor is on track to win next Saturday, but will be relying heavily on Greens preferences to get over the line. While Labor may have control of the lower house, the senate is expected to be a different story with Independants and minor parties set to have a greater say. Clive Palmer’s United Australia Party have said they won’t be backing Labor policies. In a radio interview on Sydney’s 2GB, Mr Palmer described Mr Shorten as a “bastard” over his plans to reign-in franking credits for self-funded retirees and some pensioners. Mr Palmer says if his party has the balance of power in the senate the franking credit changes will not see the light of day. Labor’s proposed changes to negative gearing may also struggle to get the green light. If these election promises can’t get through parliament, it means Labor would be hamstrung to implement its agenda.

Mr Shorten had the campaign moment of the week, where many people thought he showed the “true” side to his personality. As mentioned earlier, Newscorp papers were criticised for an article they printed on Wednesday claiming Mr Shorten had omitted facts about his mother’s achievements during an appearance on The ABC’s ‘Q and A’. Mr Shorten powerfully and emotionally responded to the criticism as “gotcha shit” defending his mother’s legacy and achievements. The 10 minute defence of his late mother Ann took many by surprise, and sparked the hashtag #mymum. Some said if this was an attempt to derail Mr Shorten’s campaign, it was a spectacular own goal.

This week we had the third and final debate of the campaign. Mr Shorten won the first two, but I don’t think he won the third. Mr Shorten and the Prime Minister were both feisty on a few key issues, but there was no knockout blow from either side. Personally I don’t think anyone really won Wednesday’s debate. Mr Shorten’s comments on Israel Folau were interesting, saying he felt “uneasy” that Rugby Australia could terminate his contract over homophobic remarks he made on social media. While he strongly disagreed with the Folau comments, he’s not sure they are a sackable offence, arguing that to a certain extent religious freedoms must be respected. The PM backed Mr Shorten in on this issue.

I’ve given Mr Shorten a B+ this week. His campaign has clearly improved as the weeks have rolled along. He looks more confident on the trail and can spend most of his time campaigning in marginal Liberal seats he hopes will move into Labor hands. He’s also confident the politics of climate change have shifted and people want action on the issue and it seems are prepared to wear the cost. The fact he has a policy agenda for the next term is compelling for some voters, but the cost of implementing the policies is an issue. Labor is predicting a $23 billion surplus by 2022. Whether they’re really able to achieve this remains to be seen, given they promised four surpluses when they were last in government and they never came to fruition.