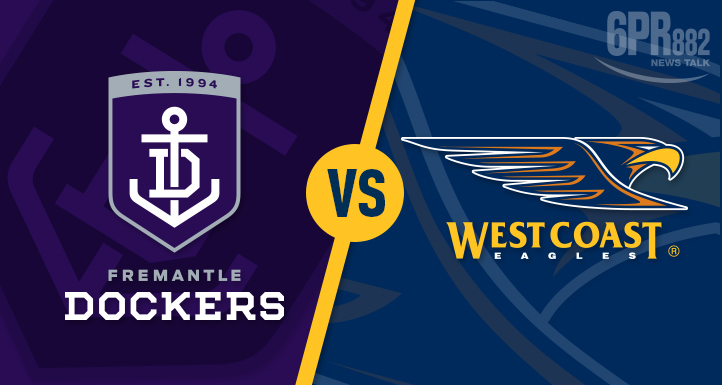 Derby’s are always special in the West, but ahead of Derby 50, there have been none bigger than this in recent years. The Dockers need a win to stay in the Top 8 after a disappointing loss to Carlton last week and will be looking to bounce back, while the Eagles are looking to tie their longest Derby win streak of 9 with a W tonight. A win tonight will see West Coast take second spot on the ladder.

A late out for West Coast, with Josh Kennedy a late out (illness), Brendon Ah Chee has replaced him in the forward line. Tom Barrass and Jeremy McGovern were both included during the week for Mark Hutchings (injured) and Will Schofield (omitted). Jimmy Williams spoke to West Coast assistant Jaymie Graham on the boundary line before the match to discuss the late change and today’s match.

Fremantle have added both Rory Lobb and Aaron Sandilands to their side today, which are big in’s for the Dockers (in size and ability). They’ve also added Mitch Crowden and Travis Colyer to replace, Bailey Banfield (omitted), Brennan Cox (injured),Brett Bewley (omitted) and Sean Darcy (managed).

Jimmy Williams spoke to David Hale, Fremantle assistant, ahead of the match

Glen Jakovich has tipped Griffin Logue as his Coates Hire Player to Watch in tonight match, in just his fourth game back, he has covered the loss well of Alex Pearce valiantly and will need a big game today on Eagles’ tall forwards. Lee Spurr has Luke Shuey as his Player to Watch, expecting the midfielder to rise to the occasion as he so often does in a Derby.

The start of the match has had that Derby pressure we’ve come to expect, both sides missing opportunities early before Jamie Cripps kicks the first goal of the match 8 minutes into the first quarter.

Willie Rioli pulls out a volley that would make Sam Kerr proud to give Eagles their second goal, beofre Cam McCarthy kicks Fremantle’s first major with just under 90 second left in the first quarter. The game has been even around the ground but the Eagles have been stronger going forward, leading 2.5.17 to 1.2.8 at the first break.

A wet start to the second quarter has not slowed down the Eagles – in fact, it has done the opposite. With rain coming down for the first 15 minutes of play, with goals to Chris Masten, Tom Hickey, and three in a quarter for Jarrod Cameron who has come alive this term. Fremantle have only managed 4 behinds as the gap only gets bigger.

Accurate kicking wouldn’t have helped the Dockers today, but it would have made it a lot closer – to end the third quarter they have kicked 2.14. Walters kicked their first major since quarter time, ending a 12-goal run from the Eagles. Cripps had two in the third term (4.1 for the game), while Cameron (4.0) and Darling (2.1) both had goals in the third quarter. A 65-point margin at 3QT, with Fremantle players waiting for this one to be over.

The final score reads 19.8.122 to 2.19.31, a massive 91-point win for the Eagles and it is Fremantle’s lowest ever score in a Derby. A great day for Eagles forwards despite slippery conditions at times, Cameron, Cripps and Darling all ending with 4 goals.

Brad Sheppard was awarded the Glendinning-Allan Medal after the match, finishing with 25 touches and 7 marks. He was kind enough to talk after the match with our commentary team and Jimmy Williams on the boundary.

Darcy Tucker was kind enough to give his time after the big loss tonight, and spoke to Frizz Ferguson in the rooms today after the match

The Tony Barlow Fine Tailoring Votes today were handed out by the commentary team, lead by Lee Spurr, and he echoed the sentiments of the Glendinning-Allan panel in giving Brad Sheppard the Best-On-Ground honours

Both of the coaches fronted the media after the game today, with Ross Lyon “happy with the intensity” despite a 91-point loss

Adam Simpson had lots of praise for his men in the post match press conference, spoke about Nic Nat’s form so far, and the great depth of his side and their ability to come in the side and play a role

A disappointing end to a great build-up for Derby 50, with the highlight for many being the unveiling of the Nicky Winmar statue before the match at the from of Optus Stadium. Eagles make it 9 derby wins in a row, and they boost their percentage and take great confidence going forward. They now sit in 2nd place, with a mouth-watering match next Friday night as they host 3rd-placed Collingwood at Optus Stadium next Friday night.

The Dockers will look to regroup after horror losses to Melbourne, Carlton, and now a 91-point Derby loss to their cross town rivals. They have slipped to 10th on the ladder, and they have a tough road trip as they face the Hawks in Launceston next week.