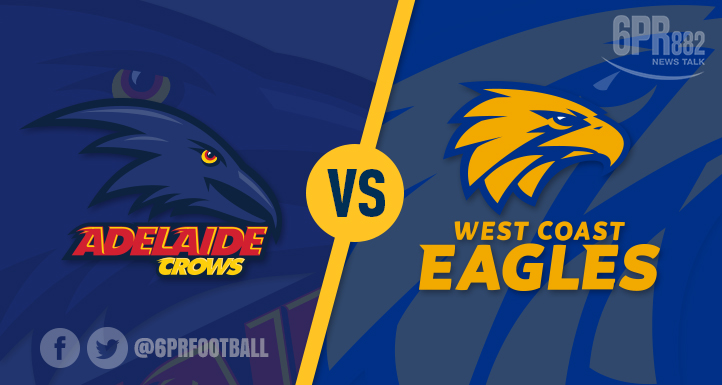 The Eagles have a tough assignment this afternoon against the Crows at Optus Stadium, who have not performed as well as expected this season but still have a strong list and an elite midfield. The Eagles will pull level with Brisbane and Geelong at the top of the ladder with a win today, and will all but secure their spot in the Top 4. Adelaide will be fuelled by losses to Essendon and Fremantle this week, leaving a big chance for them to sneak into the Top 8.

The Eagles are bolstered by Mark Hutchings and Jamie Cripps returning to a side that has won three in a row and is looking strong heading towards September, while Adelaide have added ruckman Sam Jacobs who has made his way back from injury.

The Eagles have started well in beautiful conditions, Adelaide were inaccurate in front of goal finshing the term with just the one major from Darcy Fogarty, while the Eagles have singles from Liam Ryan, Jack Darling, and Oscar Allen to give them a 3.4.22 to 1.4.10 lead.

The Adelaide Crows were led by some grunt in their midfield and a strong performance from Darcy Fogarty up forward (3 goals), and they have pulled to within a point at half time. Another exciting half of football ahead as the Crows don’t want to go away, Darling has 2 for the Eagles and Rioli, Waterman, Allen and Ryan all have one as the home side lead 6.6.42 to 6.5.41.

A contentious decision against skipper Shannon Hurn, who was penalised for a deliberate rushed behind and gave Taylor Walker a certain goal from the goalsquare. Eagles fans were unhappy about it, and it brought them back to within a point early in the third term.

That goal has fired up the Eagles, who have kicked four goals straight since that point. With 8 minutes to go in the third quarter, Josh Kennedy becomes the 8th goal scorer for the Eagles as the lead extends to 27 points, the largest lead of the afternoon. With Rory Sloane down in the rooms with what apepars to be a concussion, the Crows may have to run this match out a man down and it teeters on getting ugly for the visitors.

Fogarty kicks his fourth for the Crows to steady the ship before three-quarter time, a needed one as the Crows have a little bit of life going into the final quarter – the Eagles go into the final break leading 11.9.75 to 8.5.53

The first goal of the final term goes to, guess who, Darcy Fogarty, who now has five straight goals for the match. Eddie Betts takes a brilliant mark 5m out from goal and all of a sudden, the Crows are back in this and they close to within 11 points almost halfway through the final term.

Oscar Allen pops up for his third goal of the game with 12 minutes still to play, and Jimmy Williams on the boundary has confirmed that Rory Sloane will not play a further part in this match, and that he was complaining to the medical staff about blurred vision. He has returned to the bench but sits in the back row with a jacket on.

A third goal from Jake Waterman has capped off a day out for young forwards here in WA (Oscar Allen 3, Darcy Fogarty 5), and also looks to cap off a great day for the reigning premiers – they have an 18 point lead with 8 minutes to play, and may have finally fended off a brave Crows.

The Crows were pushing all day, but the Eagles came out winners today in front of 56,000 fans at Optus Stadium. Matt Crouch (43) and Brad Crouch (35 and a goal) cut through the Eagles midfield at times  and Fogarty kicks 5, but it wasn’t enough to beat an across-the-board performance from the Eagles.

Glen Jakovich gave out the Tony Barlow votes for Player of the Year, and has given them to Jack Darling (5 votes), Luke Shuey (4), Wille Rioli (3), Dom Sheed (2) and Andrew Gaff (1).

Jimmy Williams was down in the rooms after this afternoon’s game, and spoke to Rory Laird from Adelaide and Oscar Allen from the Eagles.

With the win this afternoon, the Eagles keep touch with the top two, and are level with Geelong and Brisbane but sit third on percentage, while Adelaide are now in the nervous situation of needing other teams to lose to make the finals. Adelaide have Collingwood at home and then Bulldogs away to finish the season, while Eagles travel to face Richmond at the MCG next Sunday for a 3rd v 4th clash, and then host the Hawks to finish the season