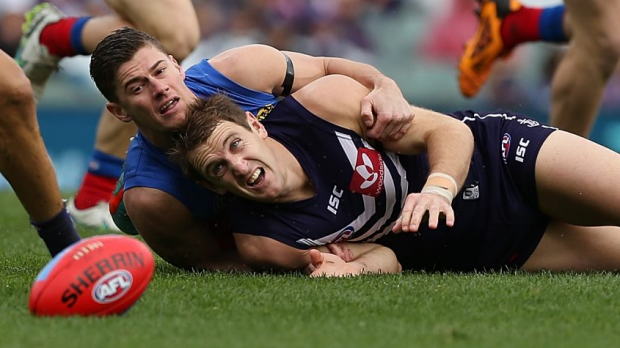 A seven goal final quarter by Fremantle sees them remain two games clear at the top of the ladder as they defeat Brisbane by 36 points in a rain soaked affair at Domain Stadium.

Michael Walters coninued his brilliant run of form with four goals while Matthew Pavlich made a welcomed return to form with three goals as the Dockers won 13.6 (84) to 7.6 (48).

Heavy rain leading up to the game and throughout the first half saw both sides struggle to make good use of the football.

It took the Dockers two minutes to open their account as Michael Walters kicked the first of his four goals for the match.

Pavlich’s first goal in three weeks moments later showed signs of a possible blowout as the top of the ladder Dockers outplayed the bottom of the ladder Lions.

Despite the ominous signs Brisbane hit back with three quick goals to lead by two points at quarter time.

For the next two quarters the sides were involved in a armwrestle as conditions made life difficult.

Both sides struggled to gain the assendancy with scores locked at 5.2 (32) at half time despite Fremantle having the majority of the second term played in their forward half.

Brisbane managed to grab the lead in the third quarter with a goal to Daniel McStay but Fremantle managed to go into the final break with a three point lead on the back of a Michael Barlow goal.

A Pavlich goal within the opening minute of the quarter opened the floodgates for the dockers as Brisbane struggled to find an answer to Fremantle’s forward press.

Danyle Pearce added his second goal of the game as Walters and Pavlich cashed in on a tiring Brisbane defence.

Lewis Taylor got one back or the Lions but the quarter belonged to the home side as Hayden Ballantyne and Lachie Neale sealed the Docker’s 36 point win.

Neale again slipped under the radar collecting 27 disposals in a game made for the little men.

Nathan Fyfe recieved some close attention from Mitch Robinson but finished the game with 27 disposals and a red face after having his pants literally pulled down during the third quarter.

Aaron Sandilands beat Matthew Leuenberger in a thrilling battle in the ruck with the Dockers big man winning the hitout count 52 to 50.

Fremantle maintain thier two match lead ahead of West Coast and Sydney at the top of the ladder, while Brisbane will finish the round on the bottom of the ladder after the Gold Coast Suns’ 55 point win over North Melbourne.