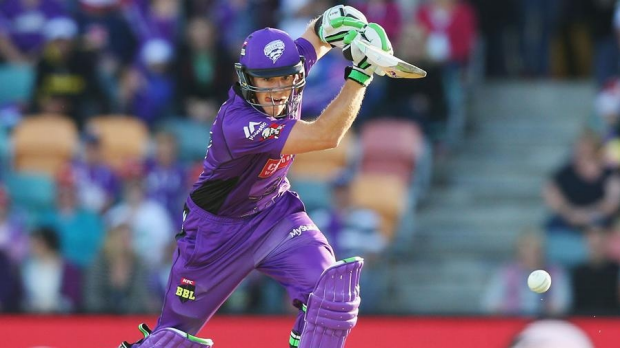 A classy captain’s knock from Tim Paine has helped the Hobart Hurricanes to their first win of BBL05 after they defeated the Brisbane Heat by 20 runs in Hobart.

The Hurricanes bounced back from their humiliating loss to the Sydney Sixers on Sunday to open their season’s account in front of a Big Bash League record crowd of 14,848 at Hobart’s Blundstone Arena.

Paine’s unbeaten 87 was a career-high in Twenty20 cricket and, not surprisingly, he was awarded the man-of-the match.

The wicketkeeper blasted six boundaries and four sixes – two of those departing over the fence and into the streets surrounding Blundstone Arena – as he batted all the way through the Hurricanes innings of 3-184.

Sri Lankan star Kumar Sangakkara made an inglorious debut for the Hurricanes in their disastrous loss to the Sixers, being dismissed for a golden duck.

But on a pitch where he had enjoyed some success with the bat for his country, Sangakkara dominated a 77-run stand for the second wicket with Paine scoring 43 off 31.

George Bailey – the only shining light with the bat up in Sydney – blasted five boundaries and a six in his 20-ball knock of 40 as the Hurricanes posted their sixth total over 180 against the Heat in their eighth BBL meeting.

Jimmy Peirson got the Heat’s run chase away to a flying start, taking 19 off Sam Rainbird’s first over but he holed out off the left-arm quick for 29 from 19 balls.

Dan Christian, playing against the Heat for the first time since switching teams, put the screws on Brisbane’s innings with the key wickets of West Indian Lendl Simmons (16) and Peter Forrest (2).

All-rounder Jason Floros hit three boundaries and three sixes in a quick-fire 42 off 23 balls before he top-edged a slog sweep off Cameron Boyce into the hands of Rainbird.

Nathan Reardon, who went past 1000 career T20 runs in his innings, scored 41 from 32 balls before he was dismissed as the required run rate lifted above a near impossible 20 in the final overs of the match.

Rainbird finished with 3-37 from his four overs in just his second T20 match while Christian claimed 2-22 and also took four catches.