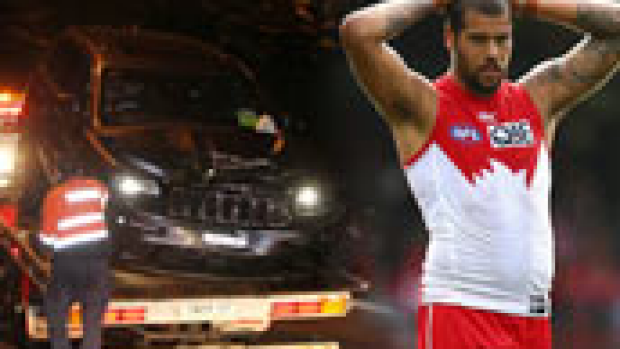 Sydney Swans star recruit Lance ”Buddy” Franklin has been issued with a traffic infringement notice for negligent driving after he was involved in a car crash in Sydney’s east on Wednesday night.

Franklin, 27, was driving a Jeep belonging to his girlfriend, television presenter and model Jesinta Campbell, when it was involved in the crash on New South Head Road in Rose Bay just after 7pm.

Police said the driver of the Jeep, whom they did not identify, crashed into four parked cars, but a roadside breath test showed alcohol was not involved.

The Jeep driven by Buddy Franklin is removed from the scene after the crash. Photo: Britta Campion

A NSW Police spokeswoman on Thursday morning said a 27-year-old man had been served with a traffic infringement notice for negligent driving. He would face a fine, but would not be required to attend court.

According to Roads and Maritime Services, the offence attracts a $405 fine and three demerit points.

In a statement, the Swans said that Franklin was the only person involved in the accident, and was unharmed.

A damaged car at the scene. Photo: Britta Campion

‘He was not carrying any passengers and there were no passengers in any of the other vehicles involved. No one was injured in the accident,’ the statement read.

‘All four vehicles were damaged as a result of the crash,’ the spokesman said.

In a spot of bother: Buddy Franklin. Photo: Getty Images

The police spokesman described the driver, who was the only person in the car, as a 27-year-old man from Bondi.

The incident will ensure the spotlight is again on Franklin and the Swans, and coach John Longmire is expected to address the media before training on Thursday.

Witness Craig McDonald, who lives above the street where the collision occurred, said he called police after hearing a ‘heavy duty’ crash through his window.

Jesinta Campbell with her Jeep in December 2013. Photo: Rachel Murdolo

‘I looked out the window and it looked like four cars in the collision,’ he told Fairfax Media.

Photos from the scene, taken by Mr McDonald, show a row of several damaged cars after the crash.

‘He was just hanging around,’ Mr McDonald said.

‘He got recognised and he was trying to stay out of the light of the cameras.’

Mr McDonald said Franklin was picked up from the scene by a friend.

It is not the first time the Perth boy has been involved in a car accident.

Earlier this year, the Swans said he had lent his luxury Mercedes to teammate Dan Hannebery when it was involved in an accident. The club said nobody was injured in the incident.

Franklin was signed by the Swans in October last year, on a nine-year contract worth $10 million, after almost a decade with Hawthorn.