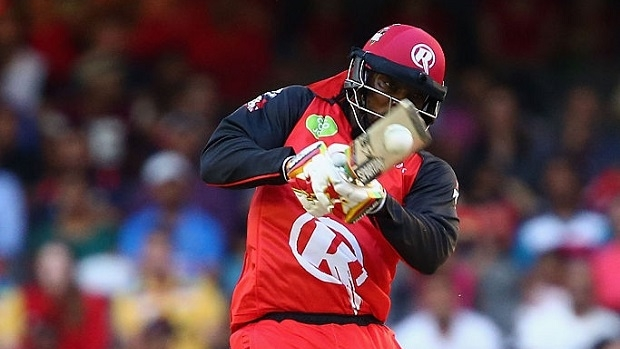 The Melbourne Renegades have revived their hopes of a Big Bash League semi-final appearance after producing a dominant performance with ball and then bat to blow away the Hobart Hurricanes at Blundstone Arena.

The home crowd of 16,412 was left stunned after the Renegades stormed to a five-wicket victory with 36 balls in hand thanks to brutal knocks by captain Aaron Finch (60 from 39 balls) and Chris Gayle (41 off 15 balls).

The victory shot the Renegades out of the bottom rungs of the ladder to within a game of fourth spot and also delivered a healthy boost to their net run rate, which could be crucial in determining the semi finalists.

In contrast, the Hurricanes suffered a blow and they are now only two points clear of the Renegades, Melbourne Stars and Sydney Sixers – all who have better net run rates.

Their best bowling performance of the tournament saw the Renegades restrict the Hurricanes to 5-140 from their 20 overs – a total which was largely inflated in the second half of their innings thanks to a half-century by Dan Christian (58 from 40 balls).

Thanks to Chris Tremain (1-11 off four overs), Xavier Doherty (2-19 off three overs) and Cameron Gannon (2-31 off four overs), the Renegades virtually won the match inside the first 10 overs of Hobart’s innings where they restricted the Hurricanes to 3-41.

It justified the decision by Finch to send the Hurricanes into bat after winning the toss.

History was created when Tremain and Gannon delivered back-to-back wicket maidens in the fourth and fifth overs and the Renegades bowled 49 dot balls in their innings.

Christian and Ben Dunk (37) gave the Hobart crowd something to get excited about as they added 74 for the fourth wicket.

Then Jono Wells chipped in with a quick-fire 26 not out at the end of the innings to at least give the Hurricanes bowlers a target to defend.

But that was blown away by Gayle and Finch inside the first six overs of their run chase.

To put their innings into perspective, the Hurricanes hit a total of 10 boundaries and five sixes in their innings. The Renegades surpassed that total inside the first seven overs of their run chase.

Cameron White (15 not out) finished off the run chase.

Hurricanes’ leg-spinner Cameron Boyce can at least hold his head high, finishing with 3-34 from his four overs to give him 10 wickets for the tournament while paceman Sam Rainbird claimed 2-34 (four overs).