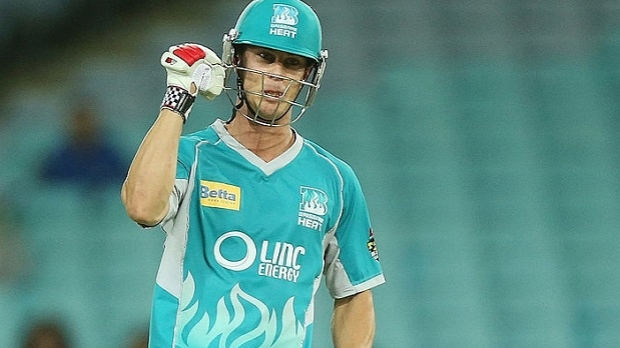 The Brisbane Heat have broken through for their first win of the Big Bash League season thanks to another stunning batting performance by captain Chris Lynn.

The Heat handed the Sydney Thunder their second straight defeat in a thrilling run chase at the Gabba, chasing down their target of 187 with six wickets in hand and three balls to spare.

The crowd of 27,507 was treated to another master class by Lynn, who blasted 75 balls from just 32 balls with six boundaries and six sixes.

That took his season’s total to 287 runs at the phenomenal average of 95 and sent another clear message to Australian selectors that he’s well and truly over his shoulder problems from earlier in the summer that saw him miss Queensland’;s one-day campaign.

Drizzling rain fell consistently through the Heat’s run chase and they were ahead of the Thunder on the Duckworth-Lewis system early in their run chase thanks to a great opening partnership between Jimmy Peirson (40) and Lendl Simmons (34).

But when both departed, the Thunder edged ahead and the Heat’s required run rate got as high as 12 an over.

He was particularly savage on Gurinder Sandhu (0-55) and Clint McKay (0-41) as he single-handedly reduced the gap between runs required and balls remaining.

He received great support from Ben Cutting, who finished 22 not out from 13 balls at the end of the innings and hit the winning runs after Lynn was dismissed caught on the boundary looking to finish the match off in the 19th over.

Lynn told Macquarie’s Summer of Cricket commentary team the emotion in the Heat dugout at the end of the game was ‘relief and pure jubilation’.

‘We’ve worked hard as a unit and hopefully we can go back-to-back – and you never know whats around the corner,’ Lynn said.

Earlier, veterans Mike Hussey and Shane Watson set a new third wicket partnership record for the Thunder, combining for a 97-run stand as they knocked up 5-186 from their 20 overs.

Hussey scored his third half-century in five innings of the series, top-scoring with 56 while Watson blasted five sixes in his knock of 46 from 31 balls.

Some lusty hitting by Andrew Russell (20 off 9 balls) and Ben Rohrer (13 not out from 8 balls) lifted the Thunder to what looked to be a more than competitive total.