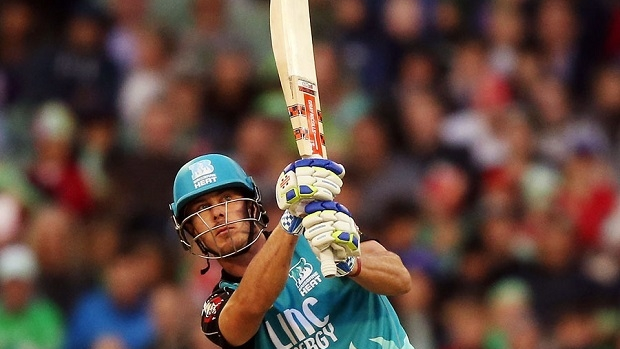 At the toss Melbourne Stars captain David Hussey referred to it a the ‘banana peel game’ for his side.

Although the Brisbane Heat are probably out of finals contention, Hussey knew they boasted a potent batting line-up and they would come hard at his bowlers in an attempt to upset their hopes of staying in contention for a home semi-final.

In a horrible night, the Stars hopes of an MCG semi-final are all but dashed after crashing to a record 56-run loss.

They now face a trip across the country to take on reigning champions Perth Scorchers at `The Furnace’ on Saturday night.

Again it was Chris Lynn that led the charge.

His seven sixes included a stunning display of hitting off Ben Hilfenhaus in the sixth over of their innings.

He smashed Hilfenhaus for five consecutive sixes and reached his 50 off just 19 balls – one short of the Big Bash League record he holds jointly with Adelaide’s Tim Ludeman.

Not surprisingly Lynn was dismissed caught on the boundary by Rob Quiney looking to lift Stars’ leg-spinner Adam Zampa over the rope.

It saw Lynn finish BBL05 with 378 runs at the impressive average of 54 and a strike rate of just over 173 with three 50’s and a century against the Hobart Hurricanes.

Zampa finished with 2-31 off his four overs while Hilfenhaus fought back after his disastrous opening over to claim 2-42.

The Stars’ run chase was virtually over inside their power play as Badree ripped through their top order to claim career-best figures of 5-22 from his four overs. He was also on a hat-trick.

Evan Gulbis (61 not out) and Hussey (25) combined for a 59-run sixth wicket partnership – a new record for the Stars – to add some respectability to their innings.

It was Gulbis’ maiden Twenty20 half-century.

Remarkably, seven of the Stars nine wickets fell to leg-spin as Mitch Swepson picked up 2-29 from his four overs. Paceman Josh Lalor (2-21) claimed the other scalps as the Stars were stricted to 9-132.

Veteran all-rounder James Hopes claimed 0-17 from four overs in what he confirmed to Macquarie Radio’s Summer of Cricket post-game was his final match for the Heat.

The 37-year-old is also expected to retire from all forms of cricket at the end of the summer.