Renegades win derby to heap more pressure on the Stars 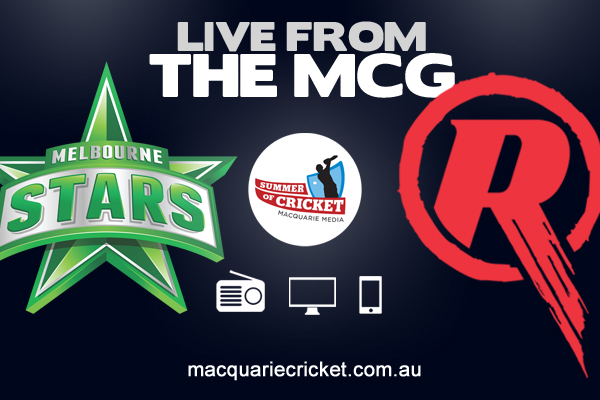 Man of the match Mohammad Nabi joined us post-match.

Melbourne Renegades have consigned crosstown rival Melbourne Stars to another defeat, winning by six wickets in front of over 48,000 at the MCG.

Renegades coach Andrew McDonald pushed Mohammad Nabi up the order to great effect, as the Afghan brought up his half century off 28 balls before departing for 52.

Aaron Finch also starred, hitting 43 (22) on the way to a comfortable victory for the men in red.

In what turned out to be a sorry night for the Stars, Jackson Coleman’s debut spell of 1-22 was the clear highlight as he showed real promise in his first match.

It’s anyone’s game at the MCG as Melbourne Stars finished on 4/157 off their 20 overs.

Kevin Pieterson showed his class for the first time this tournament, blasting 40 off 30 before before holing out to Tom Cooper in the deep.

Ben Dunk – who hit more runs than anyone during last season – top scored for the Stars but fell just three runs short of what would’ve been his first half-century for his team team.

Mohammad Nabi, Kane Richardson, Dwayne Bravo and Jack Wildermuth each took a wicket for the Renegades.

📷 | Despite the mercury reaching 41.7 degrees in Melbourne today, the fans have still turned up in their thousands. #BBL07 pic.twitter.com/Cy0qvzIlhW

Melbourne Renegades win the toss and elect to bowl at the MCG.

Here’s what’s making news in the world of cricket ahead of tonight’s big game:

Derby’s in sport are always marquee affairs but tonight’s match between the Stars and Renegades at the MCG takes on extra significance due to their respective starts of both teams this season.

Melbourne’s glamour team – the Stars – are reeling after three losses to start BBL|07. The team in green have recovered from poor starts before but as it stands, their 100 per cent record of making the finals is under serious threat, even before the ramifications of tonight’s match are considered.

Meanwhile, the Renegades are flying, having won three of their opening four games. Their only loss came at the hands of Perth Scorchers just over a week ago and on exposed form, looks to only be a blemish.

While the crowd may not be as big as predicted to due the extreme Melbourne heat, tonight’s match will take on no less importance as both sides look to strike the first Derby blow for BBL|07.

Peter Handscomb returns for the Stars once more, while the Renegades are set to go with another settled lineup as they prepare to play their fifth game this season.

Anything can happen in a Derby and that’s what makes tonight’s game so vital. The Stars will be looking to stop the rot and open their account this season while the Renegades just want to keep their promising start going.

Join us from 7.00pm AEDT on 3AW in Melbourne, NTS Digital around the country and through the Cricket Australia website and app as Tony Leonard, Dean Jones and Daniel Harford bring you all the action from the MCG.